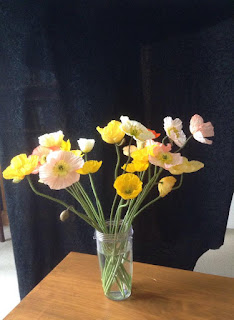 Andrew's uncle grows poppies, and we acquired this beautiful bunch last weekend from a local concert for a gold coin donation. I was thinking how they would brighten up the house with a splash of early spring, but the scent soon got to me in the car, and had me sniffing. I put them on a vase near my computer desk, but as I worked on some writing, it proved to be too much. What some people might call their perfume reminds me more of the potent breath of an old wino. It made my head ache and my sinuses itch. I had to move them out to our front room, where nobody was sitting. It reminds me of an occasion long ago, when Andrew bought me a bunch of flowers, and I ended up having to fling them out the back door just to get relief from the hay fever symptoms they caused.

Now, whenever I enter the front room, the odor from that one bunch of poppies overwhelms me. It brings to mind the poppy field from 'The Wizard of Oz' by L. Frank Baum. When I was little, I thought that was just a fictional scenario, but now I can quite understand why they made any creature who ventured through them collapse from breathing in the concentrated odor. Remember how Dorothy, Toto and the Cowardly Lion crumpled down in the poppies in a stupor from their opiate influence? I would have been right there with them in a meadow of that magnitude.

That might have been the end for those three, except that their travel companions, the Scarecrow and Tin Man were immune to the poppies' effect, not being mammals. They managed to pull their more vulnerable friends away from the evil influence of the powerful flowers until they revived.

I mentioned this to Andrew, who said, 'I like that quality in a story, when different characters all have their chance to be heroes. Everyone gets an opportunity to use their strengths at a time when nobody else can.'

I agree that this aspect is an excellent feature of a story. I thought of 'Harry Potter and the Philosopher's Stone' and the way the three young first years, Harry, Ron and Hermione (later nicknamed the Golden Trio) saved the day when they managed to get through the maze of impossibly difficult tests set up by different teachers. Of course, they would never have been able to manage separately, but together, they were unbeatable.

Do you remember how Hermione saved the boys who were getting entangled by the Devil's Snare vines, and later, she was the only one who could solve Snape's tricky logic puzzle to dodge the poisonous potions? And Harry, of course, was the one with the speed and sharp eye to zoom around on the broomstick to catch the correct flying key. Even then his quidditch skills were phenomenal. Ron's big moment came when they had to figure out how to get through the life sized chess game. The way he played it out was awesome, especially when he knew he'd have to sacrifice himself  with a colossal belt on the head from an opposing chess piece, because that would be the only way. It was team work at its very best, and a great introduction to the rest of the series.

Maybe it's similar in real life too. None of us can do everything, but we can all do something well enough to hone it until it is our strength. Then it may benefit others, while their input benefits us. Some may grow potent poppies and other agricultural products. Others may have the strength and skill to protect their loved ones physically, if necessary, while others have the voices of angels to wow us with song (definitely not me). Whenever we need something broken fixed, we probably all know the people from our friends and family who are best to ask. If something delicious needed to be cooked, I might call on my daughter, Emma, before tackling it on my own. She's acquired quite a bit of knowledge about different cooking techniques. For directions to places and possible chaffeuring, it would definitely be Andrew. If I wanted some computer help, I might ask my tech-savvy son, Logan. And for tricky cleaning advice, I'd ask my mother-in-law. These are all some of my everyday heroes.

As for me, I like to think I might be the person to turn to if you'd like a thoughtful book recommendation. I've been passionate enough about a good story to keep me both reading and writing them for years.

How about you? Who are your everyday heroes, and which trait would you consider your own strength?
Posted by Paula Vince at 11:11 AM