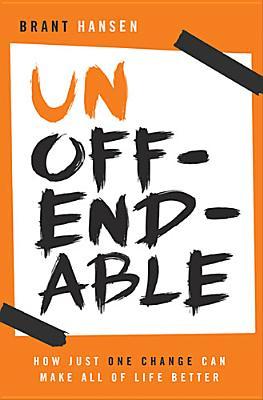 Not entitled to get angry? Really?
It's a radical, provocative idea: We're not entitled to get offended or stay angry. The idea of our own "righteous anger" is a myth. It is the number one problem in our societies today and, as Dallas Willard says, Christians have not been taught out of it.
As it turns out, giving up our "right" to be offended can be one of the most freeing, healthy, simplifying, relaxing, refreshing, stress-relieving, encouraging things we can do.

So many people take offense to the point that anger is often seen as a socially acceptable emotion. People spout their so-called righteous anger across social media all the time, and Brant Hansen encourages us to wonder whether this should be the case. As the host of a radio show, he's been the butt of offense many times. I love the irate call from a listener who heard him say, 'The weather will be hotter than it should be for this time of year.' The caller ticked him off, saying, 'God always sets the weather, so it's always perfect.'

'To those who reason, 'God gets angry, so we should be allowed to,' he would say, 'Well, God's entitled to do a lot of things we're not, such as judging and taking vengeance.' When we're as guilty as the targets of our wrath, we're not in a good position to react with strong indignation. And to those who say that it's our duty to get angry at injustice, he'd reply that taking action and fuming with anger aren't necessarily synonymous.

Hansen attempts to get to the root of why humans tend to be so volatile and easy to set off when it comes to taking offense. Situations in which others seem to be getting as much grace or privilege for less work than others may be enough to do it. Insecurity about our positions tend to make us unwilling to show grace. We justify offenses as righteous anger, much like the Prodigal Son's older brother. I like the way he urges us to embrace the 'glorious unfairness' as Jesus has been offensive in these ways for centuries.

He adds that maybe a tendency to take offense is a bit like having an infected limb. Everyone has an ego, but when it's swollen and over-sized, it's constantly being injured and threatened. It's interesting that a book about being unoffendable ends up having as much to say about true humility. He challenges us to see that we place enormous pressure on ourselves in our quests to be significant, and anything that threatens our efforts may make us flare. Truly humble folk are more difficult to offend, because they know that the things we think matter a lot, really don't matter so much.

In spite of Brant Hansen's friendly, easy-going style, I wouldn't be surprised if the content of this book offends a few people, but I'm wondering whether anyone will be brave enough to say so! I'll keep an eye on reviews to find out. I enjoyed and recommend it.