'Travels with my Aunt' by Graham Greene 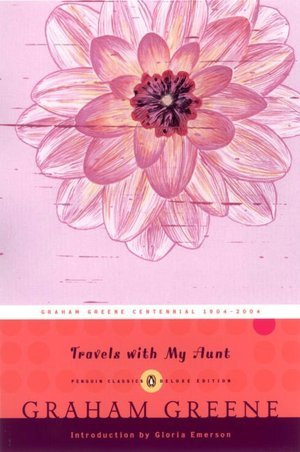 2015 Reading Challenge Week 10 - A book that came out the year you were born.

I was actually expected in 1970, either January 2nd or 7th, I can't quite remember. Instead, I was born Christmas Eve, 1969. So I slipped into the 60s with one week to spare. This book was published in 1969 and not 1970, as Goodreads claims, but I consider myself a bit of a straddler anyway. I saw that this novel was published down the track as a Penguin Classic and the blurb sounded whimsical and amusing. However, I wouldn't be surprised if this is among the wooden spoons of the challenge.

Described by Graham Greene as "the only book I have written just for the fun of it," Travels with My Aunt is the story of Henry Pulling, a retired and complacent bank manager who meets his septuagenarian Aunt Augusta for the first time at what he supposes to be his mother's funeral. She soon persuades Henry to abandon his dull suburban existence to travel her way—winding through Brighton, Paris, Istanbul, and Paraguay. Through Aunt Augusta, one of Greene's greatest comic creations, Henry joins a shiftless, twilight society; mixes with hippies, war criminals, and CIA men; smokes pot; and breaks all currency regulations.

Henry Pulling is a middle-aged bachelor enjoying his early retirement and growing dahlias. He dislikes the unexpected and thrives on routine. It's clear that he's meant to come across as a bit stodgy and tame. (If the story was set now, Henry might turn out to be a computer game nerd, considered cool by many.) He meets his Aunt Augusta at his mother's funeral, for the first time since he was a little boy. Nudging 80, she likes to live the fast life and talks him into being her travel companion.

Aunt Augusta has always ignored moral codes and social norms. She has a string of illicit affairs behind her, and crimes which she's got away with. Her frequent stories of the past seem to annoyingly get in the way of the plot, until I realise they essentially are the plot, as the travel tales meander along very slowly at times. Several of her stories cross a line into the realm of too weird for me, such as the ex-circus lover who set up a church for dogs.

But crazy as these anecdotes are, they alone are not enough to make me cringe while reading a book. Trying to figure out what did it, I realise there's a sort of double standard at play all the way through. The novel is written in such a way to try to make us admire Aunt Augusta and deplore Henry. We were being prodded to applaud her unethical choices and freedom, and think of him as a poor, sorry fool. To use the book's own logic though, the lifestyle Henry was living at the start is arguably different but not better or worse. Augusta resents the staid folk who judge her choices, yet she blows up in a very judgmental manner at poor Henry several times. He does quite a bit of kowtowing and apologising for his attitude toward her, while she never apologises for her attitude toward him, which to me, is the exact same thing.

The major plot twist is enough to convince me that Aunt Augusta actually missed out badly on a lot of the good things in life, although she never seemed to regret it at all.

The 'change' in Henry as he lightens up and comes to see the light, I also found a bit cringeworthy. I think another line is crossed when a 55-year-old man gets engaged to marry a fifteen-year-old girl. I wonder whether this novel represents the general feeling going around in the late 60s/early 70s about doing whatever feels good, or whether readers back then had similar reactions to mine. Maybe it was good to have been an oblivious baby at the time.