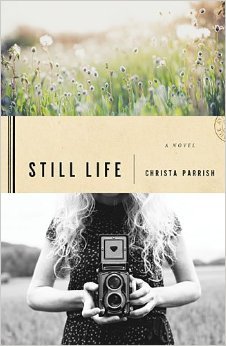 A tragic plane crash. One woman who lost her husband. Another who gave up her seat for him.

Ada spent her first twenty-five years with her family as part of a fringe religious sect. Her only contact with the outside world was through customers at their farm store. Then she met Julian, a photojournalist who'd come to document their lifestyle. They eloped mere days later and Ada was thrust into a completely new life as a wife, city-dweller, and an individual allowed to make her own decisions. But she has no idea who she is.

On her twenty-sixth birthday, Julian plans to fly home from an assignment to give her her first-ever birthday present. He's thrilled when Katherine Cramer gives up her seat so he can make the flight. But the plane crashes and everyone on board is killed, including Julian.

This story really drew me in. I didn't want to stop reading, and didn't take long to figure out that my overall impression would hinge on the final resolution of the plot. The question forming the main theme is something we've all tussled with and placed in the 'too hard' basket. Why do some people die prematurely, while others are spared, regardless of the apparent goodness of the person? It's such a biggie, I was intrigued to see what Christa Parrish would make of it.

The first part follows the lives of two female main characters in the aftermath of a fatal plane crash. The young widow, Ada, has to come to terms with the death of her husband, Julian, who was flying home to celebrate her birthday. Katherine is the woman who should have been on the plane, but offered him her seat, so she could spend time with her lover behind her husband's back. We later learn more about Julian himself, and also Katherine's teenage son, Evan, who had been born with a serious heart defect.

It's a perfect example of why I love reading and writing contemporary fiction. Apart from the crash itself, several characters had traumatic events in their pasts, but while not being glossed over, these were not the focal points. Ada's history in the cult headed by her extremist father, Katherine's decision to have an affair, Evan's heart problems. In spite of these, each of the characters come to a place where they are able to look forward to their futures with courage and hope. The book offers the hope that it can be the same for any of us.

It highlights the value of human life. How terrible that Ada lost Julian, but the alternative would have been that Katherine's teenage sons would have been left without a mother, and Will without a wife. I like the flashbacks to Julian's reflections about the value of his own life. Even though he was a famous, award-winning photographer, he sometimes felt inferior, believing that leaving a record of images on paper didn't help the world or save souls. However, what he came understand about the value of his work helped Evan, who had photography aspirations of his own.

What huge world news a commercial airline accident of that calibre would be, so I'm glad they are so rare. Although the story of how Ada and Julian came to be together may come across a little far-fetched, I've definitely read similar stories declared to be fact. The pilgrimage she undertakes after his death is rewarding to read about, and Ada possibly didn't even plumb all there was to know. Some of the habits she takes up, such as the personal photo blog, are simple things we can all do, and as several characters often remind us, we don't have to be Julian Goetz to appreciate the benefit.

I think the big question in the theme was addressed in the best way possible, and was glad to have read this novel.