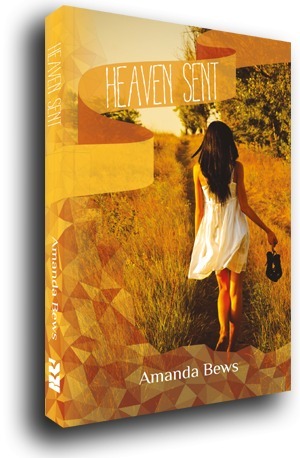 I was given this novel and thought it would be perfect for this challenge, as such a lot of the plot does take part at school, including the catalyst for the trouble the heroine finds herself in. Some people taking on this challenge have been wondering whether they could get away with school aged protagonists, without having action take place in an actual school. But 'set in a High School' sounds pretty clear to me, so I'm glad I had one up my sleeve.

Heaven’s life seems perfect. She has good grades, popularity, a rich family and the perfect boyfriend. Only she knows none of it is really true.
But one drunken mistake changes everything, as her life goes from bad to worse. With the end of school looming, a disappearing “boyfriend” and no parental support, Heaven can only wonder what her future holds.
Little does she know that it will be more than she bargained for. Sent to New Zealand to “protect” her father’s reputation, Heaven discovers a different kind of community and a different kind of future.

This Young Adult novel is set in both Australia and New Zealand. Heaven is the older daughter of a straight-laced, politician father and a hippie mother. She's lucky enough to be beautiful, smart and sporty in a culture which admires all three, and spends a lot of time trying not to be seduced into side-issues which have captivated most of her friends. As the story shows, one lapse to pressure may be enough to derail somebody's life completely.

The theme of the novel reminds me of toddlers playing with matches. We're taken instantly to a school setting with senior High School students. They are fascinated with sex and alcohol, but their flippant attitudes reveal that they don't really consider the potential dangers of what they're handling. Then, sadly, they are judged for their morals and mistakes, as if they are adults who knew entirely what they were doing all along. The reactions of both Heaven and Jarrod to the sudden twist in their plans speaks volumes.

I like that the main characters aren't completely typecast, as many of their friends seem to be. Jarrod certainly isn't the typical boyfriend who is after just one thing. He cares deeply for Heaven in his own way, and pays dearly for his impulsive mistake. For that matter, Heaven herself can be selfish (although I'm not sure this ever occurs to her). At times in the story, she doesn't give others the thing she craves most from them. At different times her mother and Jarrod both approach her, hurting and wanting to talk, but Heaven freezes them out, assuming that she already knows and won't like what they have to say.

It's very up-to-date, full of references to cutting edge technology and current Hollywood celebrities. This all makes the teenage characters' voices strong, but keep in mind that I'm writing this review at the start of 2015. Will it become dated in time, the same way as other YA novels from previous decades? On the other hand, will it even matter? Perhaps a well-written story will stand the test of time, no matter when it's set.

It's a Christian novel, but the denomination to which Heaven is introduced is identified outright as the Seventh Day Adventists, something I've found more unusual for fiction, in which churches are given indiscriminate names, such as 'The Community Church' so denominations won't be evident. I assume 'Heaven Sent' was published by a Seventh Day Adventist publishing house. The second half of the book may surprise readers who aren't expecting any type of Christian fiction, as it's not clear from the back cover blurb or the first half with the school setting.

Anyone who enjoyed the movie, 'Juno' might like to give this story a go, as Heaven's experiences are similar to Juno's in many ways. Another book this story reminds me of is 'The Last Virgin in Year Ten' by Rosanne Hawke. Overall, I think the story flows well and Heaven's voice is strong, making us want to stay with her, to see what she decides.