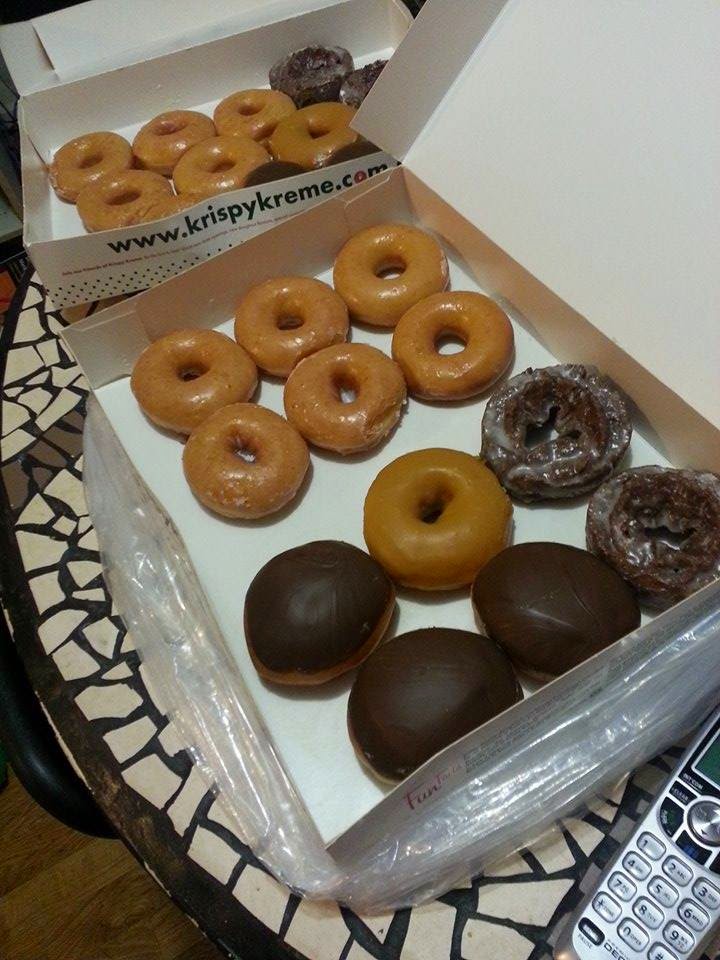 A second Krispy Kreme doughnut outlet is very soon to open in Adelaide, this time in the city centre. People will surely be camping outside the doors, because the very first customers will be given a lifetime supply of free doughnuts, whenever they want them. With the media hype beginning again, I'm reminded of this post I wrote earlier this year, in the winter when our city's first outlet opened. I'd like to share it again.

Last week, some poor teenagers were mugged for the boxes of doughnuts they'd bought at our new Krispy Kreme factory outlet which has just opened in Adelaide. In news reports, the robbers were hailed as the 'Krispy Krooks'. I'm not sure if they've been discovered and apprehended yet, but our city is going crazier over the new outlet than I ever would have expected, just because they are a well-known brand we've never had before.
On Saturday, my teenage daughter and her best friend got caught up in the hype and decided to make a trip to the factory outlet. They had to catch a bus into Adelaide from the Hills where we live, followed by a tram to the suburb where the shop is situated. They found a line twisting and curling from the shop door way down the road. The girls decided that as they had already spent so long getting there, they might as well join the end of the queue.
The wait turned out to be almost three hours. As they inched closer to the door and into the shop premises, they saw a policeman on the job, striding around eating doughnuts the staff had given him. I don't think there would have been any risk from muggers in a crowd that size. He was probably there just to make the public feel safe. The two girls decided to buy a couple of boxes each, since they'd already put in such a lot of effort.
On the way back to the tram stop, they began feeling nervous that crooks might spring out at them from the shadows, to steal their doughnuts. By the time they'd caught the bus back to the Hills and made it nearly home, the winter night was pitch black and had started to rain. They had covered many kilometres in public transport for their treats.
I couldn't really blame my daughter when she snapped at her brothers not to dig into them straight away. 'You don't know what I've been through today to get these doughnuts. My feet are aching, I've spent heaps of money, and I was cold and bored. You can have some when I say so.'
When we did get a taste, were they any good? Well, I have to be honest and admit that they were okay, but nothing special. Certainly no better than the doughnuts we can buy from our local shopping centre. The boys agreed they were nice but nothing to rave about. If I'd done what the girls did, I might have considered it a bit of a wasted day.
In fact, the loveliest, most delicious cakes and doughnuts I've ever eaten were from an Aussie country town named West Wyalong. It's like a scrub oasis in the middle of New South Wales. We were on a tour of our country with our three children, aged 9, 5 and new born. We stopped to stretch our legs and chanced upon the bakery with these delicious goods. Even though it was 2004, I've never forgotten them. I'm afraid they were far more delicious than those from Krispy Kreme last week, but nobody hears about them.
How true such things are in all of life, including the books we read. We can't help hearing about the books which are at the top of the most well-known publishers' lists, because they tend to spread through the media. Maybe these are the equivalent of Krispy Kreme in the literary world. They are the books which we hear hype about, and can't help having our curiosity aroused. We may find it easy to forget that these are by no means the only books in the market.
I enjoy receiving recommendations of more obscure books from trusted reader friends who tell me, 'I'm sure you'll love this.' And I love stumbling across books I can spread the word about in turn. It is a joy to get stuck into fiction from different nations, which I can pass on to others, saying, 'You really get the feel of the setting from this story,' or 'You'll never think of the place in the same way again.' It's been fun hosting guests who let us know about their new books. The best thing about them is that, thanks to digital purchasing options of the 21st century, they are readily available, unlike the delicious doughnuts from West Wyalong.