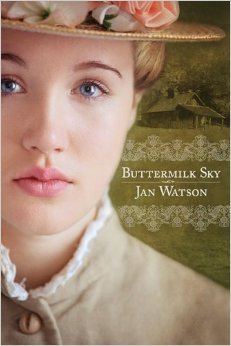 Weary of the expectations imposed on her by her strict upbringing, eighteen-year-old Mazy Pelfrey prepares to leave her home in the Kentucky mountains for the genteel city of Lexington, where she'll attend secretarial school. She knows her life is about to change--and only for the better. Everything will be blue skies from now on.But business school is harder than she thought it would be and the big city not as friendly, until she meets a charming young man from a wealthy family, Loyal Chambers. When Loyal sets his sights on her, Mazy begins to see that everything she'd ever wished to have is right before her eyes. The only hindrance to her budding romance is a former beau, Chanis Clay, the young sheriff she thought she'd left firmly behind.Danger rumbles like thunder on a high mountain ridge when Mazy's cosseted past collides with her clouded future and forces her to come to terms with what she really wants.

MY THOUGHTS:
Young sheriff, Chanis Clay, looks forward to eventually settling down with his sweetheart, Mazy Pelfrey. He's just waiting until she finishes secretarial school, which he considers a bit of a whim to get out of her system. He doesn't stop to consider that things may have changed for Mazy while she's away. She's been enjoying a more fashionable lifestyle in a bigger town, and the flattering attention of Loyal Chambers, a young man who is completely different to Chanis.

A strong romantic thread is hinted at, especially with the addition of the lover's triangle, but as Mazy and Chanis are in different scenes, living their separate lives, for such a large part of the book, it lost some  of its impetus with me. It wasn't the sort of novel I wanted to grab every spare moment to find out what was going to happen next. Having said that, I was vaguely curious to eventually find out why Mazy would choose one of the fellows when her heart seemed to be so wrapped up in the other.

It's clear this is a character driven book. Many of the secondary characters are well-depicted. The 'girl stuff' at secretarial school seems true to life. Eva is the ringleader, who all the others tread carefully around because her opinion carries weight. I felt 'princess' was a good appellation for this entitled girl who felt she should have even been exempt from the dishwashing roster. In contrast, there's Cinnamon Spicer, the cheerful, poverty-stricken girl we first see raking through garbage dumps, intending to sell other people's trash as treasure. As Cinnamon was the first character in the story, I'd expected to see more of her than we did. She seems like such a strong, unique person to end up with what turned out to be a supporting role in which nothing much happened to her.

Overall, although the characters were really well-depicted, I found the plot itself to be a bit episodic and rambling to carry them well. Still, some other readers may well love it, as I've seen books of a similar style do well for themselves. Jan Karon's books set in Mitford spring to mind. If 'Buttermilk Sky' does suit you, I see there's a whole series, featuring other members of Mazy's family, to pick up next.

By the way, I don't know if this was intentional, but it would seem Chanis might have been right about secretarial school.

Thanks to Net Galley and Tyndale House for my review copy.