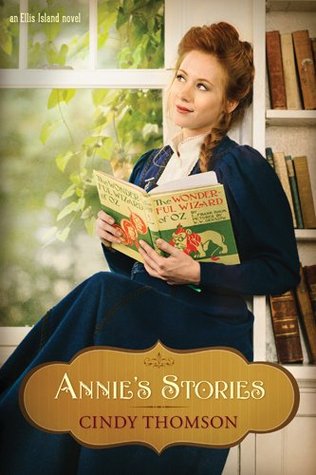 The year is 1901, the literary sensation The Wonderful Wizard of Oz is taking New York City by storm, and everyone wonders where the next great book will come from. But to Annie Gallagher, stories are more than entertainment—they’re a sweet reminder of her storyteller father. After his death, Annie fled Ireland for the land of dreams, finding work at Hawkins House.
But when a fellow boarder with something to hide is accused of misconduct and authorities threaten to shut down the boardinghouse, Annie fears she may lose her new friends, her housekeeping job . . . and her means of funding her dream: a memorial library to honor her father. Furthermore, the friendly postman shows a little too much interest in Annie—and in her father’s unpublished stories. In fact, he suspects these tales may hold a grand secret.
Though the postman’s intentions seem pure, Annie wants to share her father’s stories on her own terms. Determined to prove herself, Annie must forge her own path to aid her friend and create the future she’s always envisioned . . . where dreams really do come true.

MY THOUGHTS:
Annie Gallagher is a young Irish woman who immigrated to New York around the turn of the twentieth century. She leaves behind a volatile extended family situation and some traumatic experiences, but does manage to hold onto her beloved father's stash of children's stories. He was a hedge school master, who used to try to make a living traveling around, teaching under his own terms in the great outdoors for barter. Annie lives at a boarding house run by the loving Mrs Hawkins, who treats all the young women beneath her roof as if she's their mother.

Stephen Adams is the friendly postman, who has lost everything, including his family, but still tries to stay optimistic. He finds himself in a bind when his landlord, who is also a publisher and a bit of an opportunist, threatens to kick him out for his debt, unless Stephen can find a great children's manuscript for him to publish. Given the title of this book, it's not difficult to predict where the story is heading.

A great chunk of Annie's back story jams up the first few chapters, making me wonder if there's a prequel. It turns out there is (I haven't read it), but not necessarily the sort I would have expected. It's about Grace, one of the other girls who lives in the boarding house, and I don't know how much of Annie's story is revealed in it. I just finished wading through her back story, when another great block, this time her friend, Kirsten's, is introduced in the next chapter! It all made the movement grind off to a slow start, deferring the start of this novel's plot.

I never really got over this feeling of dragging, even though the premises of the story were so good. We have the backdrop of interesting, early 1900s America, and the sensation the publication of L. Frank Baum's 'The Wizard of Oz' was making. There's also Annie's dream of building a library to bless and cheer poor folk like herself. Maybe it's because the plot seemed to move like clockwork in several ways, with things falling into place, reminding me of a High School drama performance. I couldn't get over the feeling that an author was pulling the strings for these characters.

I did appreciate the evidence of Annie's wounds from her past, which she found hard to shake off. Post Traumatic Stress Disorder wouldn't have been named in 1901, but it was happening. Even though Annie had been rescued from the trauma of her past, she was still grappling with the memories of betrayal and dread feelings. I looked up Magdalene Laundry, and discovered that such a horrible place really existed under that name. How human, to be insecure and worried that something awful might happen again, even in new and cheerful surroundings.

Overall, though I wanted to love this book with its appealing blurb and cover, it wasn't really my cup of tea.

I received a copy from Net Galley and Tyndale House in return for an honest review.