'My Life in Middlemarch' by Rebecca Mead 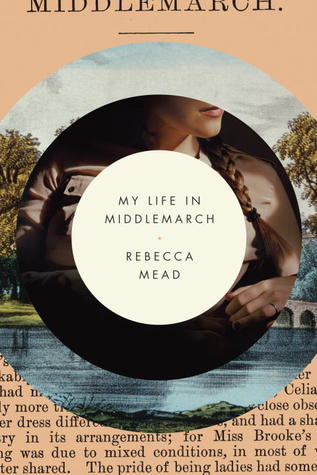 A New Yorker writer revisits the seminal book of her youth--Middlemarch--and fashions a singular, involving story of how a passionate attachment to a great work of literature can shape our lives and help us to read our own histories.

Rebecca Mead was a young woman in an English coastal town when she first read George Eliot's Middlemarch, regarded by many as the greatest English novel. After gaining admission to Oxford, and moving to the United States to become a journalist, through several love affairs, then marriage and family, Mead read and reread Middlemarch. The novel, which Virginia Woolf famously described as "one of the few English novels written for grown-up people," offered Mead something that modern life and literature did not.

In this wise and revealing work of biography, reporting, and memoir, Rebecca Mead leads us into the life that the book made for her, as well as the many lives the novel has led since it was written. Employing a structure that deftly mirrors that of the novel, My Life in Middlemarch takes the themes of Eliot's masterpiece--the complexity of love, the meaning of marriage, the foundations of morality, and the drama of aspiration and failure--and brings them into our world. Offering both a fascinating reading of Eliot's biography and an exploration of the way aspects of Mead's life uncannily echo that of Eliot herself, My Life in Middlemarch is for every ardent lover of literature who cares about why we read books, and how they read us.

MY THOUGHTS:
Many of us have one or two formative books which have influenced how we've shaped our lives. For Rebecca Mead, it was George Eliot's 'Middlemarch' which she kept returning to ever since first reading it in her teens, discovering new significance for different phases of her own life's journey. As I loved reading MM during my English classics phase as a young adult, I enjoyed reading this reflective memoir about how Mead decided to trace the footsteps of her former idol, George Eliot, visiting all the places where she lived and worked.

George Eliot (Mary Ann Evans as she was born) is revealed as an intellectual who demanded a lot of herself (you only need to look at the size of her books) but had a generous heart and a sense of humour. It was interesting seeing the changes a century and a bit have wrought on Eliot's familiar landscape. Mead even caught up with descendents of Eliot through her stepson, which I thought were fascinating. Rebecca Mead made the detailed pilgrimage because she believes that although she lives more than a century later, George Eliot was one person who helped turn her into the person she became.

Even when we delve into an author's past and realise how human they were in their frailties and hang-ups, if we're bookworms, we still tend to idolise them. Rebecca Mead saw Eliot's pen in the home of a great-great-great grandson and asked if she could hold it, bringing forth all sorts of excited thoughts that she might be holding the very pen which wrote MM.

George Eliot is shown to be a fairly plain looking person in paintings, and in this book, we get the opinions of her contemporaries. Apparently, Henry James referred to Eliot as a 'great, horse-faced bluestocking', then went on to describe the beauty of her character. By far the best part of Eliot's life is her relationship with her husband, George Henry Lewes, who encouraged her to take up writing fiction in the first place. A neighbour of theirs described what an unattractive sight they made, as they walked their little dog around town. I agree with Mead, when she says, 'I derive delicious pleasure from the two Georges' carelessness about the judgment delivered by smaller hearts and smaller minds than their own.'

Now that I've read this, I might pick up MM and remember characters such as Dorothea Brooke, Will Ladislaw, Tertius Lydgate, Fred Vincy and Mary Garth, who I remember enjoying so long ago.

Thanks to Water Brook Multnomah and Blogging for Books for giving me a review copy.

Here I am beside George Eliot's grave, at Highgate Cemetery in London. It was back in 1990, when I was a 20-year-old Uni student. What a great pilgrimage to make while I was busy studying these classic old British authors. It has both her pseudonym, George Eliot, and Mary Ann Cross, her real name at her time of death. 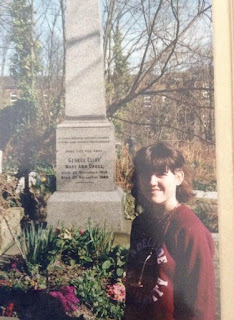