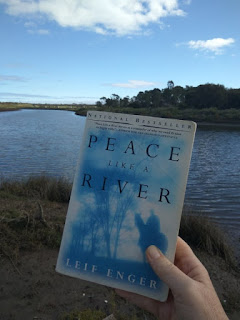 Once in a great while, we encounter a novel in our voluminous reading that begs to be read aloud. Leif Enger's debut, Peace Like a River, is one such work. His richly evocative novel, narrated by an asthmatic 11-year-old named Reuben Land, is the story of Reuben's unusual family and their journey across the frozen Badlands of the Dakotas in search of his fugitive older brother. Charged with the murder of two locals who terrorized their family, Davy has fled, understanding that the scales of justice will not weigh in his favor. But Reuben, his father, Jeremiah—a man of faith so deep he has been known to produce miracles—and Reuben's little sister, Swede, follow closely behind the fleeing Davy.
MY THOUGHTS:
This is one of the novels I've seen recommended far and wide online, but turns out to be super hard to get hold of in Australia. In the end, my daughter brought it home for me, among a stack of souvenir books she picked up from Portland, Oregon, during a holiday to America last Christmas. I was so glad to see it among the pile, and it didn't let me down.

It's the early 1960s and the Land family are suffering a major crisis. School janitor and single dad Jeremiah rescues a female student from some thugs in the gym. The resentful attackers warn him to watch out for the safety of his kids. That's a big enough threat for the eldest son Davy, who takes the law into his own hands and shoots both menaces dead when they break into the house at night. He reasons that he has vulnerable younger siblings to consider, and never pretends to be remotely sorry.

The court doesn't think it's a clear case of self-defense. On the eve of serious charges, 16-year-old Davy breaks out of jail and flees. His father sets off in a trailer looking for him, along with 11-year-old Reuben and 9-year-old Swede. Their search brings them through freezing cold country and face to face with goodies and baddies alike, including Martin Andreeson, the federal cop who's also on Davy's trail and Roxanna Cawley, an ally who takes on the role of an angel. There's also Jape Waltzer, a dangerous sort of fruitcake people prefer to steer clear of, even when he claims to be on the right side.

The great, immersive writing is told from Reuben's point of view at some future date as an adult. He delves into the futility of longing to be stalwart like Davy but trying to cope with severe asthma, which they only ever seemed to tackle with steam inhalation. It would seem Ventolin didn't exist back in the early sixties. He also grapples with his own conscience throughout the story, especially when the lines between right and wrong blur, and the clearly honorable move appears to make him the worst of all traitors. We all see what he should do, but clearly appreciate the bind he finds himself in.

Maybe I wouldn't have enjoyed the story so much if the narrator wasn't such a cool kid who never holds back his own caustic observations about people he thinks should be ashamed of how they behave. He has a wry, cynical, sometimes self-deprecating style of humour I can't help but enjoy. And he himself is not immune from his own digs, whenever he thinks he deserves it. Somebody suggested that Peace Like a River is the perfect book to read aloud, and if I'd come across it during our homeschooling days, I probably would have done it.

Reuben feels frequently awed by his family members. Along with manly, justice-seeking Davy, is their sharp and precocious little sister Swede, who has a wonderful way with words and produces poetry and ballads that puts her in the category of kid geniuses like Roald Dahl's Matilda. In all honesty, I would have doubted the possibility of such brilliant verse from a 9-year-old, because her vocabulary and themes are so mature and polished, except that I know such young prodigies do exist. And their father is a prayer warrior who Biblical type miracles tend to follow. This causes his children to react according to their characters, and diverge off on different faith paths. Reuben tries to explain it. 'Davy wanted life to be something you did on your own. The whole idea of a protective, fatherly God annoyed him. I hadn't the strength to subscribe to it, for I was weak and I knew it.'

Maybe not quite five stars from me, although it's hard to figure out why not. Perhaps because of a few coincidences that seem stretched beyond the scope of Jeremiah's miracles (which I was quite cool with, by the way). Also because I wasn't totally happy with the way things panned out all round. Almost, but not quite. However, it was a great read which the cover tells me is a 'national bestseller.' Well, I'm sure it could also be an international one, if it was made easier for Aussies to get our hands on.