'Death Comes for the Archbishop' by Willa Cather 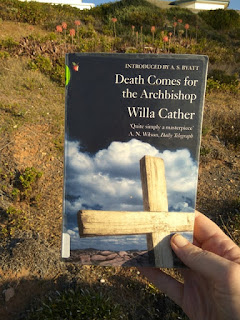 Willa Cather's best known novel; a narrative that recounts a life lived simply in the silence of the southwestern desert.

MY THOUGHTS:
This is a wonderful read, so don't be put off by the title. I think the faintly ominous overtones are unfounded. That looming appointment does catch up with main character Father Latour by the end, but only in his twilight years after a long productive life, and it comes across as far more of a triumph than a loss. He faces it in a super reflective, peaceful and calm state of mind. 'I shall not die of a cold, my son,' he tells his young protege. 'I shall die of having lived.' His death is written like a final victory, and you feel like cheering him rather than being sad.

The book is set during a fascinating period of history. It starts in 1851 when the state of New Mexico has been recently annexed to the USA. (I'm an Aussie and had to consult a map. It's down south between Texas and Arizona.) New Mexico is considered a Catholic area since it was evangelised by Franciscans in the 1500's, but the population, consisting greatly of cowboys and Indians, has been bumbling along essentially uninstructed for 300 years. The chiefs at the Vatican decide to send someone to crank up the faith, but it'll have to be a special guy. 'That country will drink up his youth and strength as it does the rain.' Still, they decide a young man named Father Jean Marie Latour might fit the bill, along with the assistance of his boyhood friend Father Joseph Vaillant.

The story is made up of a string of beautifully written incidents which reveal a lot about human nature, the influence of the landscape, and the interplay of both. It's such a challenge for the pair of friends, because their Catholic mission field is slap bang in the middle of Protestant America, and since it's mostly unconnected by railway and rivers, they have to rely on their trusty mules to slowly get around.

The differences in the ways the best friends operate is an interesting study, based on their personality styles. Father Joseph is a people-loving, folk-focused extrovert who pushes past the barrier of a weak physical constitution driven by concern for the needs of others. Rash and impulsive, he's never afraid to ask for what he wants to the point of cheekiness. Yet because he makes his generous heart so evident, people are willing to give him whatever it is.

Latour is more the studious, academically inclined introvert whose fuel is reflection and thought. He has moments of wrestling with the black dog, but uses the same contemplative bent that gives it to him to get out of it.

I love all the sections told from Father Latour's point of view because he has such a gentle, refreshing head space in which to find ourselves. He's impeccably polite, even while lost and parched with thirst in the desert, and treats animals with a degree of care and respect reminiscent of Saint Francis. Any reader used to glossing over providence and simple miracles surely can't maintain that view if they're looking through Father Latour's eyes. Being him for the duration of the book is a faith building experience. He's so steeped in wonder of his tradition, and the certainty that things happen as they should.

The quiet success of Latour's life stems from his deep respect for the ancient traditions of the land's natives. Never once does he attempt to stamp out the colourful culture he finds, just because he's presenting something different. Father Latour can put himself in other people's shoes. He understands that a person's identity is more than bone deep, and offers his Catholic faith as a precious alternative or extra. He accepts that there are rich veins to their spiritual make-up that he has no idea about, and courteously declines to probe where he isn't welcome. Even the New Mexican way of embracing Catholicism is spiced with their long-established character. 'Religion is necessarily theatrical to these people.' Latour realises that the European memories that shaped his own psyche are not transferable to their minds. He follows the thought through to its logical conclusion that generations of their own unique lore is similarly untranslatable to him.

Overall, the land is the book's real main character. The beautiful descriptions are often no more than a sentence, such as, 'Elsewhere the sky is the roof of the world, but here the earth was the floor of the sky.' The natives relate to the land in a sensitive way, respecting its character enough to pass through gently and quietly, leaving no trace, while white settlers always wish to assert their presence by making changes. Even Father Latour succombs to the seductive desire to leave a legacy for himself by building a cathedral. It's very interesting to reflect that the egos we battle with and try to whip into shape might be very much a western construct we've taken on board. There have been others in the world brought up without that emphasis on the need for personal expression. It seems as necessary as breathing in our day and age, so we declare it's a God-given characteristic, which rings true, but do we take individuality and self-expression to an extreme never intended by either God or nature? It's a weird but sort of freeing question.

I don't really know why I'm taking off half a star, except that maybe because such a long period of time is covered in a reasonably short book, it feels like a bit of a surface skimmer at times. I would have happily read much more of the same material we're offered. I guess that's a good reason to take off half a mark.

You might like to compare this book to another I've reviewed, about an overbearing missionary with a very opposite spirit, who crashed and burned. You'll find it here.