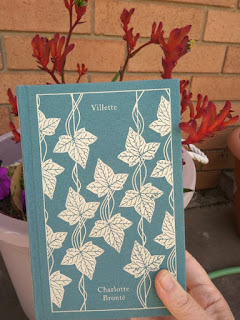 With her final novel, Villette, Charlotte Brontë reached the height of her artistic power. First published in 1853, Villette is Brontë's most accomplished and deeply felt work, eclipsing even Jane Eyre in critical acclaim. Her narrator, the autobiographical Lucy Snowe, flees England and a tragic past to become an instructor in a Belgian boarding school in the town of Villette. There she unexpectedly confronts her feelings of love and longing as she witnesses the fitful romance between Dr. John, a handsome young Englishman, and Ginerva Fanshawe, a beautiful coquette. The first pain brings others, and with them comes the heartache Lucy has tried so long to escape. Yet in spite of adversity and disappointment, Lucy Snowe survives to recount the unstinting vision of a turbulent life's journey - a journey that is one of the most insightful fictional studies of a woman's consciousness in English literature.

MY THOUGHTS:
This is a re-read for me. My first time through, as a Uni English student, was very sketchy in my mind. It's based on Charlotte Bronte's time as an English teacher at a girls' boarding school, or 'pensionnat' in Brussels, and her alter-ego is a serious and reflective young woman named Lucy Snowe, who falls for two men within the pages of the story. First is John Graham Bretton, a young doctor she knew when they were both in their teens, and second is Monsieur Paul Emanuel, the professor of literature at the school.

To use an exercise simile, this book is like a gym workout. It takes effort, but leaves us feeling fitter in our mind and spirit. We should keep away from Charlotte Bronte's books when all we want is a quick and leisurely read. This is no stroll in the park. Nor is it the sort of book we pick up to knock off a few chapters in our down time. I'm sure our benefit in reading it is in direct proportion to the amount of time we're prepared to pause and reflect on Lucy's word choices, and the apt imagery she draws from all sorts of places, including scripture and mythology. She invites us to consider how her frequent cultural and literary analogies apply to her life, and by extension, our own.

I'd go so far as to say that I wouldn't even take seriously the review of anyone who gallops through, because speed is evidently not the spirit in which Charlotte wrote it. You'd miss too much of what it's really all about. Yet that's exactly how I approached it as a teen at Uni, because we all just wanted to get abreast of our huge mountain of texts and churn out the essays required. This time around, I appreciated it one hundred percent more than I did the first time.

Most fascinating to me is Lucy Snowe's character. She's so repressed and restrained, which makes her one of the best examples of lonely characters with rich inner lives I've come across. Lucy is great at slamming the door on any pleasure that tempts her, because her experience in life thus far has taught her that fun surely isn't for the likes of her, a solitary girl with no family who has to work hard to earn a living. She thinks it's so fleeting, letting down her guard would make her way too vulnerable to heartache and disappointment. Yet every so often, others are stunned by a glimpse of Lucy's true feelings before she crams the lid on them again.

Reading the book feels like being a recipient of huge trust, because we can't help but appreciate the tremendous sacrifice and effort it must take Lucy to bare all, as she's evidently doing. Reviewers who criticize her personality possibly don't realise that people similar to them are part of the reason why she finds it so hard to venture out of her shell in the first place. She might be super-reserved, but Lucy is definitely no coward. This girl can control a class of sassy teenage girls, and even attempts to touch a ghost.

Then there's the Monsieur Paul factor! Wow, to make me end up liking this guy shows Charlotte Bronte's skill with the pen. It takes just a moment to sum him up as a choleric, despotic little bossy pants, who is out of line a countless number of times. He calls Lucy brazen and bold when she's nothing of the sort, orders her to move away from a particular 'immodest' painting at the art gallery, and throws a tantrum when she doesn't offer him flowers on his special day along with everyone else. (That was actually sort of funny.)

In the spirit of Lucy Snowe herself, reason would say he can go take a running jump. Yet this guy's earnestness and energy has a way of growing on us, and he delivers some great lines, such as, 'My establishment of servants number ten,' as he holds up his fingers. And of course, he's the one guy who sees through Lucy's facade to her real depth beneath. Monsieur Paul is a good example of how weaknesses and strengths may be one and the same, depending on how you look at them. By the end of the novel, I think overbearing and horrid  have morphed into straightforward and unpretentious to us as well as to Lucy. He's the sort of person who makes me think we should just put the best slant on someone's personality in the first place.

Here's a quick tip to get the most out of reading Villette. Make sure to get hold of a copy with a glossary or footnotes that translates all Paul's French dialogue to English, because Charlotte Bronte tends to have him rant in his native tongue when he's especially indignant or excited. My first edition didn't have it, and I was pretty sure his carrying on would be hilarious, if only I could understand it. Other characters, such as Ginevra and Madame Beck, tend to do the same. I've just splashed out on a copy that does have a glossary, but going through looking for them in retrospect isn't quite the same.

The supporting cast of characters make a great study too, starting off with the furtive Madame Beck, who keeps her staff under such sneaky surveillance. Then there's Graham, who is just a nice guy who treats everyone well, with no idea how hard poor girls like Lucy might fall for him. Yet he's the type to choose a girly girl, which is exactly what he does. His love interest Paulina is even described like a pretty little lapdog, and I did roll my eyes a bit at this pampered princess and her helicopter dad.

I liked the lightweight Ginevra Fanshawe, who is street smart and canny in her own fun loving way. Early on, she realises that trying to live up to Graham's lofty assumptions about her goodness would be too much for her. Good on you, Ginny! Best leave him for someone who's up to the task of wrapping her whole identity in his, which is just what happened. Although Ginevra and Lucy have different ideas about the ideal man, I can't help thinking Ginevra and her future hubby Alfred would probably be fun people to hang out with.

The ending open a whole can of worms for discussion, especially the final page, but since this review has grown long enough, I'll leave that one for another time. (Update: It is here.)

Overall, I adored this book! I can see why George Eliot and her husband, George Henry Lewes spoke so highly of it. At the outset I thought, 'It'll have to be pretty darn good to live up to yours, George,' and sure enough, the more I read, the more I found something very Middlemarchy about it, especially the depth to which it plumbs Lucy's character. Maybe it's even pushed Wuthering Heights off its pedastal as my favourite book from the Bronte sisters, and if someone like George Eliot agrees that it's even better than Jane Eyre, I won't be afraid to come right out and say it too.