'The Three Musketeers' by Alexandre Dumas 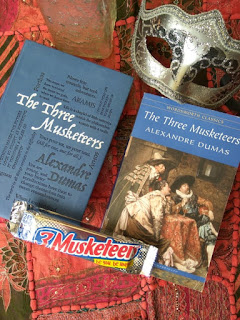 This swashbuckling epic of chivalry, honor, and derring-do, set in France during the 1620s, is richly populated with romantic heroes, unattainable heroines, kings, queens, cavaliers, and criminals in a whirl of adventure, espionage, conspiracy, murder, vengeance, love, scandal, and suspense. Dumas transforms minor historical figures into larger- than-life characters: the Comte d’Artagnan, an impetuous young man in pursuit of glory; the beguilingly evil seductress “Milady”; the powerful and devious Cardinal Richelieu; the weak King Louis XIII and his unhappy queen—and, of course, the three musketeers themselves, Athos, Porthos, and Aramis, whose motto “all for one, one for all” has come to epitomize devoted friendship. With a plot that delivers stolen diamonds, masked balls, purloined letters, and, of course, great bouts of swordplay, The Three Musketeers is eternally entertaining.

MY THOUGHTS:
I don't think Alexandre Dumas cared one whit about literary excellence or anything like that. He just wanted to tell a good yarn, full of duels, waxed moustaches, and prickly, swashbuckling heroes. It took me a chapter or two to get used to the 'slay people as soon as you look at them' mindset, but then we were off. Seriously though, wasn't life-expectancy already short enough in the seventeenth century without cutting it even shorter?

The action takes place over about eighteen months, and never stops. Our boy d'Artagnan is an 18-year-old with a super-touchy, 'Do you want a piece of me?' attitude that gets him in loads of strife. Luckily for him, he has the skillful moves to wriggle out of it, sometimes by the skin of his teeth. He leaves his father's house with the intention of making his fortune, and has a letter of introduction to Monsieur de-Treville, in whose foyer he first meets the three buddies, Athos, Porthos and Aramis. D'Artagnan manages to accidentally offend each of them separately within the space of ten minutes, but after a few hiccups, the four of them become inseparable, getting embroiled in all sorts of delicate political and romantic jams.

One of their first quests is to recover a dozen diamond studs to save their queen's honour. She'd given them to her lover, the Duke of Buckingham, and now the jealous king is onto it.

Athos is the little gang's suave, enigmatic mentor, concealing his true identity and a troubled past which has sworn him off women. Porthos is the guy with self-esteem issues, coming off as a big, brash show-off. And Aramis is the modest chap who never boasts, but quietly aces everything he attempts. And he claims his real passion is the church. He's just filling in time musketeering until he's written his theology thesis.

The story was serialised in 1844, but set in 1625. Dumas took the liberty of crafting his adventure story around the true lives of people from history. An odd 220 years was still recent enough for readers to remember stories of Louis XIII, his lonely Austrian queen Anne, Cardinal Richelieu and the English Duke of Buckingham. Yet it was far enough in the past for him to stretch the truth to snapping point without getting in trouble. That's the feeling I get anyway. I doubt the real Cardinal was quite so crafty, or the Duke such a Playboy with nerve enough to seduce a foreign queen on her own turf. (For that matter, would Anne of Austria have really given her secret lover a string of diamond studs which was a birthday present from her husband? A tacky lack of judgement, for such an elegant lady.)

The biggest villain is a piece of work known as 'Milady', who's like a composite of Queen Jezebel, Bellatrix L'Estrange and Narnia's White Witch. Those who know her never, ever mess with her, but the naive, 20-year-old d'Artagnan does, putting him at the top of her hit list. This story suggests to me the habit of teenagers going off to seek their fortune is flawed, because they aren't wise enough! A guy who knows a certain woman is a monster, yet still jumps into bed with her, because he's too amorous to run away as fast as he can urgently needs his mother's input.

The dark humour is so black a shade at times, that we get invested in quests and relationships to be taken off guard. Towards the end I was blinking and mumbling, 'Whoa, that's a bit rough.'

Overall, I really wasn't a huge fan. Slapstick and tragedy aren't my favourite genres, and this yarn is like some strange hybrid that incorporates both. I doubt I'll ever read it again, but having said that, I found myself grinning a lot all the way through. I stumbled across C.S. Lewis' opinion in a book of essays, and he mentioned that The Three Musketeers holds no appeal for him because the pace gallops non-stop at the expense of atmosphere building. For example, when they cross the channel, there's no sense that London differs from Paris in any way. Most likely, d'Artagnan doesn't stop long enough to blink and take it in. Lewis says, 'There's no rest from the adventures. One's nose is kept ruthless in the grindstone.' I get where he's coming from.

Close to the very end, Athos give d'Artagnan a piece of elder brotherly advice that's intended to help him put things in perspective and move on. In general, it's a great sentiment that's transferable to the reader. He says, 'You are young, and your bitter recollections have time to change themselves to sweet remembrances.' It was such a wise thing for Athos to say, but in d'Artagnan's case, I don't really buy it. After all that went down, I'd suggest what the poor kid needs is hours of trauma counselling for a whopping case of PTSD. But maybe that's the difference between the twenty-first and seventeenth centuries.