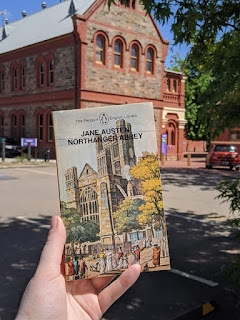 Jane Austen's first novel—published posthumously in 1818—tells the story of Catherine Morland and her dangerously sweet nature, innocence, and sometime self-delusion. Though Austen's fallible heroine is repeatedly drawn into scrapes while vacationing at Bath and during her subsequent visit to Northanger Abbey, Catherine eventually triumphs, blossoming into a discerning woman who learns truths about love, life, and the heady power of literature. The satirical novel pokes fun at the gothic novel while earnestly emphasizing caution to the female sex.

MY THOUGHTS:
This is my first re-read in years, and I don't think I ever appreciated the treasure this book is. It slips under the radar so often, I can't remember ever hearing anyone call it their favourite Austen, but I might have to change that.

On the surface, a basic plot outline could sound a bit boring. A gullible teenage bookworm visits Bath for the first time, then gets to stay with new friends at their home; a restored Medieval abbey. Her imagination runs wild, and she starts fancying she's really in a creepy Gothic thriller like the trashy novels she reads, which puts her in some awkward situations. This book is so much more than its summary though. It's a brilliant, finely-nuanced character study that held my attention every second.

Firstly, Catherine is a breath of fresh air. She never picks up on hints of what's really going on, but reads a lot into what isn't. She's a former tomboy who admires high achievers but never aspires to be anything special herself. A girl after my own heart. It makes her stand out among the crowds of novel heroines who were written to be 'novel' in the most extraordinary sense of the word. Many authors seem to share the implicit understanding that main characters must be important or unusual to deserve a following. To me, Catherine Morland is unique especially because of her ordinariness. In the world of literature, super-average is super-special.

She's fun because she's so limited in her way of thinking. Catherine has only ever been around kindly, straightforward country people, who have helped shape her own character. So she meets each new acquaintance in Bath assuming they'll be just the same. In other words, Catherine thinks everyone else is looking at the world through her own good-natured lens. The gold-diggers, self-seekers and fortune hunters who cross her path are able to fool her for a long time, because she's simply too sweet to recognise their true colours. And her first friends, sister and brother duo Isabella and John Thorpe are definitely not 'what you see is what you get' type of people.

Isabella is a pretentious social climber, and expert in the art of backhanded compliments. ('Miss Andrews is so beautiful, I can't think why the men don't like her.') She's always on the lookout for the next best friend or boyfriend to boost her own image, and will dispense with the last in a flash. But Catherine, being Catherine, accepts Isabella's statements on face value and believes what she says she means rather than what she does mean, which is often the complete opposite. It's easy to form pictures of Isabella as we read. I can imagine her sweeping along beside Catherine, peering around at the same time for anyone better to impress.

And John Thorpe is his sister's male counterpart, a show-off and wind-bag who's always contradicting himself depending on the image he wishes to convey in the moment. He's a crashing bore and the suitor from hell, yet for so long, Catherine doesn't even realise he has designs on her. (She gets off lighter than her brother James, who actually gets engaged to the two-faced Isabella. James has his own case of the Morland family naivety, and manages to dodge a bullet.)

A good Regency novel has to have a great hero, and smart-aleck Henry Tilney ticks my boxes. I can imagine he might seem too big a stirrer for some. He's the master of pay-outs, and the sort of guy to set eyes rolling. But I give Henry my thumbs up for recognising Catherine's good nature. He's a sound judge of character, even if she isn't. A huge part of his dawning fondness for her is because he appreciates the way she attributes the best and purest motives to others. In a world where so many guys pursue young girls because they're 'hot', kudos to Henry for being attracted to Catherine for a higher reason!

His father is a well-drawn character too, giving off all sorts of intimidating vibes. He's a bit like Andrei and Marya's formidable dad in War and Peace, and also has something in common with the Azkaban dementors of Harry Potter. A real fun-damper and soul-sucker is this guy. But he takes a shine to Catherine for a reason we discover as we read. He and she are total opposites in every way but one. They both assume everyone looks at the world from their point of view. General Tilney guesses everyone is mercenary to their core, with pound notes for eyeballs. I love it when he shows Catherine over his property assuming she's summing up the potential value, while all she's thinking about is spooky stories.

Getting back to her passion for reading, the bookish bits are fascinating to any reader. My house is full of Harry Potter fans, but for our counterparts of the early nineteenth century, it was all about creepy, formulaic Gothic novels like Anne Radcliffe's The Mystery of Udolpho. A fan is always a fan. So Catherine and Isabella's, 'Hurry up and read the next chapter of Udolpho,' translates to, 'Have you seen the latest episode of Riverdale yet?' What cool evidence that impressionable young fan girls never really change. And it's nice that Jane Austen was actually doing a pretty good P.R. job for Anne Radcliffe. I wonder what she'd think of our current fandoms. I know J.K. Rowling has called Austen one of her favourite authors, and I'm sure Jane would return the favour.

Anyway, I loved every minute, and I'll finish off with one of Catherine's unintentional witticisms. 'I cannot speak well enough to be unintelligible.' I'm with you on that one, Catherine, but although she'll never be an academic waffler, she's learned a lot about detecting ulterior motives by the end of the story. .