Totally Different, But Exactly the Same 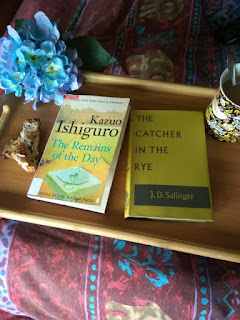 I recently read Kazuo Ishiguro's The Remains of the Day, which reminded me strongly of another novel I read earlier in the year. After some head scratching, I realised it was The Catcher in the Rye by J.D. Salinger. At first I wondered how I could have missed it, the parallels are so striking. Both stories are set in the same decade, the 1950's, and the chief plot take place in under a week. In both cases, the main character sets off on a short journey. Holden Caulfield decides to skip school, so he can hang out in the city before going home to his family. And Stevens the butler has been given generous leave from his employer to take a driving holiday, and decides to visit an old friend. But most of all, both main characters narrate their stories in a similar manner as they travel. They each deliver streams of consciousness, in which sudden memories pop into their heads, and tug the stories into all sorts of meandering and revealing deviations, and dense backstory.

So overall, the biggest factor in common seems to be the resemblance of the two main characters. But hold on a minute! The more I think about that, the more totally crazy it seems. Nobody could possibly be more dissimilar than these two guys. Surely they are poles apart. The evidence of this is overwhelming.

1) Stevens is a senior gentleman, and Holden is a 16-year-old.
2) Stevens takes every implicit social rule totally seriously, while Holden finds holes in everything, and takes no establishment seriously at all.
3) Stevens is fully committed to his post, and Holden is a free spirit, committed to nothing.
4) The decorous Stevens would never do anything that would raise an eyebrow, but sassy Holden has just been expelled from school.
5) Holden is attracted to girls, and attends a dance, hoping to strike it lucky with a one-night-stand. Stevens considers himself way removed from thoughts of romance at all, since it would take the focus off his all-important job.
6) Stevens doubts he'll ever pick up the knack of banter to suit his new employer, while Holden's smart-alec comments have long been his facade.
7) Stevens takes every opportunity to shovel pomp and ceremony on for appearance sake. Holden detests anything that remotely reeks of phoniness.
8) Stevens is the ultimate conformer, and Holden is the ultimate rebel.
9) Stevens is the sort of guy Holden would roll his eyes at, and maybe even despise for adding to all the pretension and snobbery at large in the world. And Holden would be way below Stevens' notice.

So why do these two main characters, polar opposites in almost every way, remind me of each other? I think it's because their minds keep skittering back to their deepest regrets, which sets them off trying to justify the inevitable self-recrimination that floods in. Then they each think out long and convincing rationales and justifications to help them hold their emotional pain at arm's length. These male protagonists stand for totally different values, yet in their innermost hearts, they're pretty identical. It makes me wonder whether we'd find this touching vulnerability true of most people, if only we'd give them a chance.

There are such big implications for us readers, who follow the circuitous reasoning and storytelling of both Stevens and Holden with sympathy and liking. Even though their personal ethics and priorities are each the inverse of the other, we are willing to spend the hours with them that it takes to read the books. If we can like two polar opposites, maybe we can like anybody, if we catch the fleeting common denominator that often remains hidden. I believe I've struck one of the benefits of reading novels. I'm beginning to think that anyone who claims to be a serious fiction reader surely can't hold grudges, form prejudice, or make snap judgments as easily as those who aren't. It must to occur to us some time that those we find most annoying or hard to understand, are possibly just the same as us where it counts.

Has this struck you the same way, along your reading journey?
Posted by Paula Vince at 5:00 AM