'The Remains of the Day' by Kazuo Ishiguro 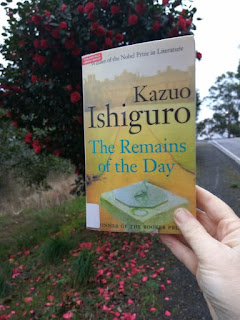 In the summer of 1956, Stevens, a long-serving butler at Darlington Hall, decides to take a motoring trip through the West Country. The six-day excursion becomes a journey into the past of Stevens and England, a past that takes in fascism, two world wars, and an unrealised love between the butler and his housekeeper.

MY THOUGHTS:
I'd never read anything by Kazuo Ishiguro before, so picked it up when I saw it at the library. It's a stream of consciousness narrative by Stevens, the butler. His employer, Mr Farraday, has offered him a chance to take a driving break for a week. He decides to spend it by visiting Miss Kenton, a former head of household staff. Stevens wants to see if she'd consider coming back to resume her old post, since she's indicated her marriage may be shaky. On the way, he records some events that happen to him along the road, and also reminisces lots about days gone by. So the story lapses into frequent flashbacks.

Stevens turns out to be one of those super-polished butlers who live out their role 24/7. He refuses to let his personal life spill into his job, and slams so many doors, there's really no personal life left to seep in anyway. Brilliant British butlers were all about never being shaken out of their professional roles. He believes that a butler of any calibre must be seen to inhabit his post, and not take it on and off like a pantomime costume, and that only the British have the correct dignity and restraint to make the job an art form. Those of other nations were really only second-rate manservants, but the Brits were butlers to the core. So he reaches a point where he's stiff and starched even in his down-hours, which to Stevens, is a mark of total success.

Butlers also took great pride in accepting posts only from masters whose work they could totally respect and support, and Stevens has devoted most of his life to his former employer, Lord Darlington, who passed away three years previously. The poshest butlers are really serious about reflecting the glory of the great men they serve. In such a way, they consider themselves contributing their own input to world affairs. The bulk of Stevens' memories take place between the two World Wars, when Lord Darlington was sympathising with the Germans, who had such a huge financial and economic burden to carry because of the rough terms of the Versailles treaty. Nobody had a clue that certain unscrupulous Nazi's would take advantage of this simple man's generosity and manipulate it for their own purposes.

So what happens when the cause to which you've devoted your life turns out to have a shaky foundation? As the plot unfolds through flashbacks, we see how Lord Darlington, used as tool by the wrong hands, lived to be discredited and taken-down. His memory is an embarrassment to those who knew him, so should that reflect on Stevens too? He wonders if Lord Darlington's fall from grace means that he's wasted his own life.

Kazuo Ishiguro does a great job of getting Stevens to ponder these questions in such a subconscious way that he hardly realises he's even thinking along these lines. The occasions when he flatly denies ever having even worked for Lord Darlington are quickly explained away with some conscious rationale. And Stevens questions may apply to us readers, or at least get us thinking. Does misplaced zeal for anything mean that we've wasted heaps of time, or even squandered our lives?

Another regret Stevens skirts around is having wasted every opportunity for a deeper relationship with Miss Kenton. The memories he digs up shows that there was definitely a mutual attraction, but both were unwilling to take the plunge over the lines of respectability of their professional roles. Twenty years further on, it's a case of accepting the choices they believed were best at the time, and the lives they led to. They each shape their philosophy to equip them to handle the rest of their days with optimism.

Miss Kenton says, 'One cannot be forever dwelling on what might have been. One should realise one has as good a life as most, perhaps better, and be grateful.'

As for Stevens, he finally shapes his vague misgiving into words. 'I'll try to make the best of what remains of my day. What can we ever gain by looking back and blaming ourselves if our lives haven't turned out quite as we might have wished?' He decides that big sacrifices must be made wholeheartedly, and should be a cause for pride and contentment regardless of results.

It's a nostalgic but melancholic sort of novel that sets us pondering where our own priorities should lie. For me, they've never been about work first, and never will be. I prefer Pip's old chum Mr Wemmick from Great Expectations as a role model for a good work/leisure balance, and definitely not poor old Stevens. I haven't seen the movie, with Anthony Hopkins and Emma Thompson, but since it was nominated for eight Academy Awards, I'm wondering if I should.