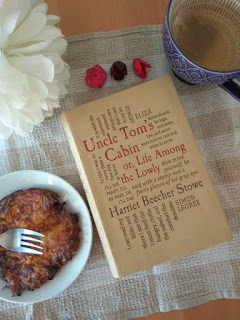 The narrative drive of Stowe's classic novel is often overlooked in the heat of the controversies surrounding its anti-slavery sentiments. In fact, it is a compelling adventure story with richly drawn characters and has earned a place in both literary and American history. Stowe's puritanical religious beliefs show up in the novel's final, overarching theme—the exploration of the nature of Christianity and how Christian theology is fundamentally incompatible with slavery.

MY THOUGHTS:
This is my choice in the Classic Tragedy section of the 2019 Back to the Classics Challenge. I left this category until almost last. To say I was reluctant coming into it would be an understatement. Cruelty and heartache remain on my mind for ages to the extent that it's easier to dodge their influence. When I saw the sub-title, 'Life Among the Lowly', I was even more reluctant to enter in. But I knew this challenge would be the best way to get myself reading a classic that helped shape history. To encourage myself even more, I purchased a beautiful Canterbury Cloud edition. And now that I've finished, in all honesty... it was brilliant!

It's packed full of triggers for the softest-hearted readers among us, so be prepared to get really angry and wish you could teleport back into the story to kick a few butts. Nothing presses my buttons quite like seeing such outrageous times as these, where some human beings were denied all rights and treated as commodities by others. It's full of slave owners, like Mr Shelby, who mess around splitting families without a qualm, to get themselves out of personal jams. And slave traders, like Mr Haley, in the profitable business of selling fellow humans to feather his own nest.

It begins when Mr Shelby, swamped with debt, decides to sell two valuable slaves to help make ends meet. One is a four-year-old boy named Harry, full of health and potential. The other is everyone's favourite pal, the pious and capable 'Uncle Tom' who basically keeps the plantation running. When word of the deal spreads, Harry's mother Eliza flees with her son under cover of night, and her husband George follows them. However, Tom decides to play by the corrupt rules and leave his fate in God's hands. The book switches between both plights, so we keep up with Eliza and her family, and also with Uncle Tom, who experiences both ends of the spectrum when it comes to future purchasers.

At first he strikes up a friendship with a beautiful little blonde girl named Eva, who he saves from drowning when she falls overboard from a paddle-steamer. It seems like a no-brainer for her grateful dad to purchase Tom, and things go well at this stage. But later, after a series of tragedies, the worm turns and Uncle Tom finds himself with the despicable Simon Legree.

My favourite character is Little Eva's attractive young father, Augustine St Clare. He's a firm believer in the evils of slavery, but is too passive for a long time to stand against the big-wigs. Augustine can't stomach the system, yet has a natural distaste for confrontation. He's convinced himself that treating his own slaves kindly is his contribution to humanity, but grapples with the suspicion that it still falls short of a true man's stand. Augustine's character is a real prod for any of us who ever choose to stay mute, out of conviction that nobody will listen anyway. He's got a great way with words, a sharp wit, and gives some of the best lines in the book.

Then there's Simon Legree. Whoa, I've got to say it, this guy is possibly the biggest son-of-a-bitch in literature. You'd have to search far to find his equal, for there could be no-one worse, and I've read a lot of books. Sling your best insults and they'd be sure to fit him. He could be called a waste of oxygen, a blight on whoever he crosses paths with, and proof that his parents should have used contraception. And his ramshackle plantation is like the house from hell, a match for his bullet-headed appearance and foul nature. Selfish and brutal to the core, he stands for all the men who were enabled to do whatever they liked in those evil times, because they were doing nothing illegal. Some of his own quotes speak for him. 'I used to doctor them when they was sick, but lost money on 'em, so use 'em up and buy more is my way. Don't go for saving n----rs. Frail ones last for two or three years, but I can get six or seven years out of strong ones.' And there's plenty more quotes where those came from.

The only thing as sickening as Simon Legree is the attitude of some of the misguided Christians of the time, who preached that it's God way to keep some high and others low. At least there are plenty of good Christians, like those from the Quaker settlements who helped George and Eliza, to balance the corrupt influence throughout the book. And the good abolitionists who were willing to wake up any time of the night to do their bit for escapees.

I never thought I'd be the one to say this about such a sad story, but the content is horrific, confronting and disgusting enough for it to deserve a five star mark. I've noticed a recent trend in which offensive books from the past are being banned or softened to suit the politically correct sensibilities of modern readers. Some decision makers believe that since we're in a new era, we need to leave our sordid past behind. Well, Uncle Tom's Cabin is the sort of book that strengthens my opposite opinion. We need to let them stand as they are. How can future generations learn from history if it's erased behind them like a bad piece of homework? Removing all traces of what happened lets humanity off the hook too. 'We don't talk about that,' is never a responsible attitude, yet it's a stance taken too often by librarians, leaders, publishers and school boards who seem to have the klout to make decisions for us all. What a travesty to sweep past events and mindsets under the carpet, and to do so dishonors the memories of heroes like the brave Quakers in this novel, and authors like Harriet Beecher Stowe, who deserve to be heralded for all time for their courageous stands.

Talking about Beecher Stowe herself, a quick bit of research on her really wowed me. It seems she suffered Alzheimer's when she grew old, and spent the last few years of her life totally re-writing Uncle Tom's Cabin. In her own mind, she was writing it for the very first time, fueled by the same burning conviction that she had to stand up for those who had no voice of their own. And when people compared that version with the published one, they were remarkably similar all through. What perfect proof that she considered it her life's mission, and gave it her all.

I guess this review is way long enough, but there are other great characters too, such as little Topsy the slave girl, who stand out as awesome.

I am taking a half mark off purely for a personal reason. I don't take kindly to my favourite character being killed off for a plot device. Especially when he had so much left to give, and the author's purpose for his demise was clearly to make things worse for Tom. But the fact that it's merely half a star shows how much I value this book in spite of such a big drawback. It's so well worth a read.