Stories to read in the loo 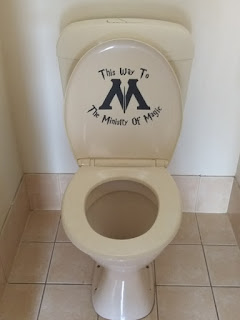 I'm taking on a challenge I received after compiling a former list, Books to read in the bath tub. They all contained at least one anecdote about characters having a soak in the tub. My friend Nola dared me to come up with something similar about characters in the loo. If you take a look at the comments on that post, you'll see. I wasn't confident that I could brainstorm enough of them, but decided I'm not one to shy away when someone's thrown down the guantlet :)

What makes it so tricky is that fictional people rarely seem to need the toilet. Most authors always try to stick to incidents which are vital in carrying on their story, and natural functions fall into the category of TMI (too much information). When we look at maps of literary houses or villages, they often omit these rooms or blocks completely. So I knew that if I did happen to find any, the trip to the loo would have to be integral to the plot. Here's what I came up with.

First I tried to think of awkward moments. They were surprisingly less than I'd expected.

1) Choking on a Camel by Michal Ann McArthur

It's a boarding college story about a 'good girl' Alexandra, who finds herself grappling with temptation, not to mention deep questioning of the institution's tenets. Anxiety always grips her stomach and makes her dash straight to the loo, so it's a trigger that she needs to look after some mental or emotional problem. Probably not so different for many of us in real life, I'd wager. (My review is here.)

2) Along Came Polly
OK, it's a movie, but a great example. I loved Ben Stiller as the angsty Reuben who suffers a bout of IBS after sampling some spicy food from the relaxed Polly (Jennifer Aniston). So he blocks up her loo, then accidentally tries to fix it with a prized antique doily. Surely it doesn't get any worse than that.

3) The Maid of Fairbourne Hall by Julie Klassen
This one's a fun story in which the main character assumes a disguise, to wriggle out of an unwanted engagement. The toffee-nosed, aristocratic Lady Margaret is desperate enough to apply for a job as a housemaid, but her new duties include emptying the family's chamber pots each morning. They are people she used to hang out with on formal occasions, and needless to say, it's not her favourite job.

4) The Simpsons
Do you remember an episode when Homer has lots to drink, then urgently needs to relieve himself, but the only toilet is on the top of a high-rise building? I like it when stories mimic reality. Something similar once happened to my Dad, after drinking coffee on a winter walk in England. All the toilet blocks along the Brighton foreshore were locked up with signs informing us they're, 'Closed until Summer.' We Aussies weren't impressed.

5) The Book of Strange New Things by Michel Faber

Peter is the first missionary to ever visit Mars, but he has some awkward communication gaps with the natives to start off. On his first morning among the Martians, he tells a chieftain that he'd like to 'pass water,' and the little fellow obligingly leads him past a big pond. You can imagine him thinking to himself, 'Whatever.'

Next are toilet stories involving life or death issues. Some people meet their gruesome end on the loo, or manage to narrowly escape the fate. It turns out to be an easy place to be attacked or assassinated.

6) Game of Thrones by George R.R. Martin
Tyrion Lannister corners his father Tywin while he's sitting on a castle privy, and shoots him with a crossbow. Good riddance, many fans say. The Lannisters are not the nicest lot.

7) The Bible
Yes, this example is straight from history. King Saul was relieving himself in a cave when the mighty David decided to spare his life. He chose to sneak up behind him and snip Saul's robe instead. Not only was it unsporting to take advantage of an enemy in such a vulnerable position, but David was very honourable about sparing the Lord's anointed ruler. Still, I can understand why many of his loyal troops considered it a perfect opportunity gone begging.

8) The Redback on the Toilet Seat
This Aussie folk song expresses the dangers of not checking where you intend to relieve yourself. The singer, 'didn't see him in the dark, but boy I felt his bite.' What a potentially dangerous place.

9) Quenarden
Allow me to add a little fantasy trilogy I wrote myself, several years ago. In one incident, the heroine Amber grudgingly allows the hero Pedor to go free, while she yearns to catch him by surprise, just because he's relieving himself in a vulnerable position. Needless to say, these two grow much fonder of each other as the story progresses.

10) Ulysses by James Joyce
This is just one example of why I found this Irish classic incredibly hard to plow through. Every minute in one particular day has to be accounted for, including the hero Leopold Bloom's morning toilet ritual. It seems to drag on for about 100 pages, with every spin of the toilet paper roll. Not riveting reading, believe me!

Now, this is more like it. At least we know where the toilets are at Hogwarts because things actually happen there. Poor Hermione is trying to hide in the girls' toilets when Harry and Ron charge in to save her from the Mountain Troll. And years earlier, the unfortunate Moaning Myrtle is crying in a cubicle when she comes face to face with a basilisk that kills her. Now she simply uses that toilet block as a base from which to chat up boys (who seem to have plenty of reasons to enter).

And at the Ministry of Magic, the employees flush themselves down each morning, because it's their secret entrance, unknown to Muggles. Toilets are so important to their smooth running, it's no wonder Arthur Weasley has to check many faulty ones in his line of work for the Misuse of Muggle Artifacts office.

This astute little girl asks the teacher an honest question while they're listening to her read Mike Mulligan and his Steam Shovel. 'If Mike Mulligan digs down a hole all day, how does he go to the bathroom?' The hopeless Miss Binney gets flustered and tries to fob it off as not important to the story, but none of the kids buy that. They know, as we do, that it's a vital part of life. I reckon Miss Binney could've made something up, if she'd been wiser. 'He took a bottle to hide under his seat.' Or, 'He was careful to go beforehand and had to keep his legs crossed until the end of the day.'

So there you go, I made it to a dozen, even though I admittedly padded the list with a few non-book examples, such a film, TV series and songs. If you can suggest any others, please let us know in the comments, to add to the list. And in case you wondered, the photo above is our loo. My daughter ordered the decal sticker, and now that we're soon to move, we'll have to peel it off :( But when we get to the new house, I'm sure we'll get another one.