'Little House in the Big Woods' by Laura Ingalls Wilder 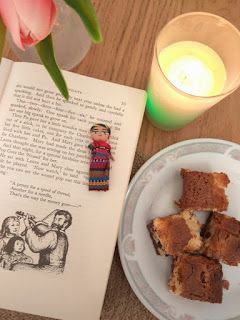 This year, I'm hosting a read-along of all of the Little House on the Prairie Books by Laura Ingalls Wilder, which you'll find here. We'd love you to read along and share your thoughts, if you feel so inclined. I haven't included a sign-up sheet of any sort, but kept it all very informal.

An autobiographical children's novel written by Laura Ingalls Wilder and published by Harper in 1932. It was Wilder's first book published and it inaugurated her Little House series. It is based on memories of her early childhood in the Big Woods near Pepin, Wisconsin, in the early 1870s.
The novel describes the homesteading skills Laura observed and began to practice during her fifth year. Hard work is the rule, though fun is often made in the midst of it. Laura gathers wood chips, and helps Ma and Pa when they butcher animals. She also helps Ma preserve the meat. This is all in preparation for the upcoming winter. Fall is a very busy time, because the harvest from the garden and fields must be brought in as well.

MY THOUGHTS:
Laura and her sister Mary had lots in common with Little Red Riding Hood. They lived with their family in the middle of the dense woods with wolves as their neighbours, not to mention bears and panthers. It's the first in Laura's series of novels about her life, and kicks off when she's almost five years old. On the surface, it's a simple, heartwarming story about reminiscences of days long ago, but what a lot we can take on board from the pioneering spirit displayed in these stories!

I'll start with Ma's great example of making an effort, right down to finishing touches. She wanted everything to be pretty, to the extent of using grated carrot to dye her churned cream, and snips of red flannel to cast lovely kerosene light patterns. Since there was normally nobody but her husband and small children around to notice, she might have been forgiven for not bothering. You might well ask, 'Why make even more work for yourself?' But Caroline understood the power of small embellishments to boost her sense of well-being. She obviously did nothing just for show. What would be the point? It was self-care, because she knew the mood-boosting impact of small details. Caroline was a truly classy lady whose motto might as well have been, 'We're worth it.' Even on the dreariest winter day, she'd never dream of just letting things go.

Next there's Pa's example of the power of stories and music. If all his daughters ever learned from him was their potential to make life richer and happier, he was a successful Dad. He kept drawing on his good memory, sense of humour and fiddle to keep things bright around the house, and work their magic on everyone else too. What a guy, to take responsibility for the fun times, as well as keeping everyone safe and alive. Laura and Mary saw him go off to work each day, but of course it wasn't the common office job many modern fathers have. Risking his life out hunting was all in a day's work for Charles.

I also love his matter-of-fact attitude about strict time management. I went into this re-read assuming they were free of the deadlines and pressure of our era. But that's not true, they were just different. For example, Pa and Uncle Henry were desperate to get Henry's oats shocked before the pending rain, or it would all be for nought. And when they finished, Charles couldn't hang around and relax with his brother, because he had to make it home to milk his cows on time, or their output would be skimpy. These days we may roll our eyes when we hear some old-timer say that waste is a sin. But in their time and place, it was an indisputable fact. The book starts off with the butchering of a pig. I wouldn't be surprised if the only bits of him left over by the time Pa and Ma finished with him were his teeth :)

There are several examples of fantastic creations that can come out of humble circumstances. The delicious food produced from their own little grey log house wouldn't be out of place in a gourmet deli, including cheese, salted fish and hickory smoked venison. There are really interesting details of the steps involved in each process. (A little calf paid a high price for the rennet needed in cheese making.) It's soon clear that one of Laura's trademarks is describing food so our mouths water, even when it's just simple fare. Grandma's 'hasty pudding' is basically just boiled polenta, and 'Johnny Cake' is humble corn bread. But it's written in such a way that I'm sure they'd be tastier than any 21st century attempts. 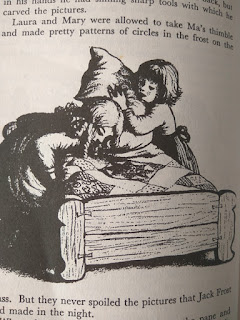 However, it's not all charming nostalgia. Even a five-year-old girl can't escape tense undercurrents. The story moves along merrily for about 100 pages, then a sentence hits us from seemingly nowhere.  'Mary's hair was beautifully golden, but Laura's was only a dirt-coloured brown.' That observation is like a plug releasing similar gripes, to the point where Laura loses her temper and slaps Mary. Oh oh, sibling rivalry rears its head, and I can't help thinking of the elderly Laura, dredging into her buried past to write about the 60-year-old friction. It turns out to be not just Mary's hair but her whole attitude, behaviour and position as eldest child that got under Laura's skin.

Envy can be an irrational emotion, because deep down, I'm sure Laura wouldn't even want to be like Mary, whose idea of fun seemed to be stitching samplers and stirring pots. Mary comes across as a bit of a princess in this book; a prim, girly girl with just a hint of superiority. Perhaps she found obedience came easy because she wouldn't dream of all the adventurous, quirky and mischievous things that filled Laura's head. Yet we get the impression Laura might have happily given up her own uniqueness, for the chance to be more like her sister. Maybe readers should take it as a hint to carefully consider what we envy. Would it even be worth it?

Laura wasn't too crazy about Sundays either, and I can sort of understand why. These devout 19th century Christians seemed to make hard work out of their 'no work' rule. The girls didn't have much to fall back on, so no wonder the day dragged. I would've considered making clothes for their paper dolls to be more leisure than work, but nope! It was a punishable offense on that day. Am I the only one who thinks the Ingalls family seemed to err on the side of the Pharisees in this respect? I suppose that since life was one long round of house and maintenance work for Charles and Caroline, making a particular effort to keep the Sabbath Day holy had to take top priority, or it would easily slide into the same old grind as the rest of the week.

You can't read this story without a healthy respect for the Big Woods. The Ingalls family could only tame it to a certain extent, but mostly had to adjust to it. They needed to be familiar with its cycles and patterns to eke out a living. Pa even says, 'A man just has to keep everlasting at it, or the woods'll take back the place.' It's easy to imagine that when they left, that's just what must have happened.

Laura turns out to be an early (and very young) believer in the benefit of mindfulness. Little House in the Big Woods finishes off with one of those epiphanies that the present moment is all we really have. She's lying in her bed while Pa plays the fiddle and Ma sews, and the wise five-year-old thinks, 'This is now. It can never be a long time ago.' But of course it is, and I've clocked up many similar moments in my own life, which I'm sure we all have. What a nice reminder to value the little moments before they slip away.

The quote of the book might be Pa's enthusiasm for modern times. ' Other folks can stick to old fashioned ways if they want to, but I'm all for progress. It's a great age we're living in.' I'd love to know what he and Laura would make of our digital era.

Overall, I loved the re-read, including cameo appearances of long-gone relatives such as 'wild' Uncle George who came back from the army with his bugle, and naughty cousin Charley who had his own 'boy who cried wolf' story. Now bring on the next story in the sequence, Little House on the Prairie.