'The Manse' by Meredith Resce 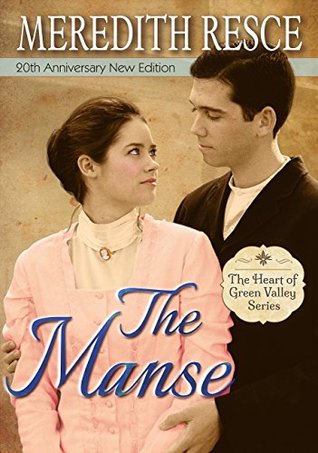 Kate has a secret she doesn’t want anyone to know, especially the new minister – the man who has taken her father’s position. John Laslett has just arrived in Green Valley in his very first appointment as the new parish minister. He has been employed by the patron lady, Vera Wallace, and she has seen to his every need. But there is something strange about the housekeeper she has sent. Kathryn is an efficient housekeeper, but John cannot seem to break through the cold exterior. Something is wrong, he is sure, but he doesn’t know what… Historical romance set in colonial Australia

MY THOUGHTS:
This version of Meredith Resce's first novel has been completely re-written to coincide with its twentieth anniversary, and better suit the tastes of more modern readers. First off, I've known the author for several years. She was the first person I asked for publishing advice, and since then I've even worked on a collaboration with her. I was pleased to be offered the chance to read and review this new version, since 1997 was a long time ago. I wondered how it would shape up with my memory, and it turns out to have several of the same features as the many novels she's written since.

For the first time in his life, 24-year-old John Laslett has defied his controlling mother. He's accepted the post as minister at Green Valley, a small rural parish, rather than a more prestigious position in Melbourne she would have preferred for him. But being pushed around by bossy females seems to be his lot in life. John's autocratic patron, Lady Vera Wallace, wants to control him to the nth degree. And his haughty new housekeeper has a chip on her shoulder he can't understand.

Kate is the daughter of the former minister, who's been dismissed in disgrace. (You have to read a fair way in to find out why.) Since he's far from home at the time, she's all alone when she's evicted from the manse. Being homeless long before the days of government support is terrifying for a young woman, so she decides to set herself up as a servant at her own former residence. Kate can't help resenting her father's replacement, who appears to be Lady Vera's puppet.

We wonder how these two can possibly be drawn together, when they have such good reason to misunderstand each other. The story switches back and forth so we can clearly see both points of view. My main thought this time through is how John and Kate are the first in a long line of heroes and heroines readers have enjoyed. It's easy to see why this story has endured for twenty years. When you add plot elements such as hidden identities and secret scandals to the colonial era, it's a good combination. Back in 1997, Meredith Resce noticed a gap in the market for Australian female readers who like solid, clean romances with the promised hook of a happy ending, and she set out to fill it.

If you like this style of uplifting love story, give it a go, and you may find yourself wanting to read the rest of the Heart of Green Valley series too.

I have to say re-reading Kate's plight at this time is significant, since recent circumstances have forced us to look for a new home too. That's one of the great things about reading, when it shows that someone else's situation is always more extreme. I'm looking forward to reading Green Valley, the second in the series, before too long.

Thanks to the author for my review copy.

You may also like the background of how we four authors collaborated on The Greenfield Legacy.
Posted by Paula Vince at 5:00 AM