Here's a bit of fun. I was nominated by Trix Wilkins from Much Ado About Little Women for the One Lovely Blog Award. Exploring her blog is a treat, since it has a specific focus on Little Women and all things Louisa May Alcott. I love those stories, and Trix has written extensively about them herself. She is definitely the 'go to' person for more on Meg, Jo, Beth and Amy.

Trying to think of 7 interesting facts of my own turned out to be a bit of a challenge, and I decided to keep them book and travel related as much as I could. So here goes.

Guidelines for the One Lovely Blog Award

* Thank the person who nominated you and link their blog in your post.
* Include the rules and add the blog award badge as an image.
* Add 7 facts about yourself.
* Nominate between 3 and 15 blogs for the award.

1) I nearly slid off the Leaning Tower of Pisa
When I was a teenager, I did a brief bus trip through some European countries with my parents. The sky was teeming when we reached the famous landmark, but that wasn't going to stop me and my Dad from the once in a lifetime opportunity. I was wearing a slippery pair of shoes, which isn't a good idea when the arches plunge straight to the ground, even if the building isn't on a tilt. On one of the upper stories, I felt my feet beginning to slide near the window, and stepped back just in time. I'd be willing to bet it's far safer these days than those slapdash old 1980s, when everyone had to look out for themselves.

2) I played Maria in West Side Story
That sounds like a fantastic claim to make, but it was a High School production of a few selected scenes, and I was only 14 years old. The teacher encouraged us to try to use Puerto Rican accents as best we could, and even though I had no idea what Puerto-Ricans sounded like, I made an effort. My parents said the weird fake accent slid away during the night, and returned at moments when I remembered. Mine wasn't a singing role (thankfully) but the boy who played Tony had a lovely soprano voice, which hadn't broken yet. We didn't speak one single word to each other during all the rehearsals.

3) I achieved top marks in Year 12 English
After a lot of hard work all year, I was one of the students who got full marks in the English exams, and still have the newspaper list containing my name, along with hundreds of others. I thought University English would be a cinch after the great feedback I always got from school, but I was in for a shock. For my first assignment, I received 64%, and was so heartbroken, I went to query the professor about it. He tried to assure me that it wasn't a bad grade, and I hated him! Throughout my three years there, I never did become a straight Distinction student. Promising starts sometimes fizzle out. In retrospect it's not really a big deal anymore, but at the time I had a real identity crisis.

4) I read the Harry Potter books in top secret
It was the early 2000s, and I was caught in the outcry of well-meaning Christians calling these books the devil's work, and warning us not to let our little angels be corrupted by reading them. My eldest son was 5, and I remember the social occasion when one of the other Reception mums said the warnings were a load of rubbish. She thought the books were great, and 'may even become classics'. Knowing her to be a very devout woman, I got hold of the books (only four at the time), and the rest is history. What a valuable lesson to never rely on hearsay. Letting others make decisions for us may rob us of terrific experiences. I've long since lost touch with that other school mother, but still think of her with gratitude, for speaking out an opinion which she knew was unpopular at the time.

5) I thought I saw the ghost of Branwell Bronte
During my international holiday, we were walking one of the city walls somewhere in Yorkshire, and passed a cute, other-worldly looking young man with bright red hair, painting on an easel. When we said, 'Excuse me,' he just smiled and bowed without making a sound. I whispered to my parents and sister that he looked like the brother of Charlotte, Emily and Anne. Then I peered back to have another look, and he'd disappeared! As it was a high city wall and there was nowhere he could have gone, it gave me a thrill up my spine :) By the time we got to the bottom of the steps, he was back again. The others said he'd probably bent over to pick up his brush, but I preferred to think it really was not just some nineteenth century specter but Branwell himself.

6) I've written nine novels which have been published
This was a labour of love over many years. What more can I say? When my older son was at kindy and my daughter was sound asleep in her capsule at the back of the car, I'd park somewhere and write. I was happy to do the work of editing and re-editing until I pretty well knew each line that was coming by heart. I looked forward to seeing how thick those computer pages would turn out to be in book forms. And I would dream about my characters, and hum bars of music which reminded me of them. Those were good times.

7) We were homeless with 3 kids, including a new born baby
Back in 2004 when we sold our house, we decided to take a great homeschooling journey up the centre of Australia and back down the coast, with our caravan. We had no idea where we'd settle down once we returned to Adelaide, but trusted it'd work out when the time came. It was a great holiday, although there were some awkward moments, such as the time we were pulled over for a routine car check one night by a cop in Toowoomba. He gave us a funny look when he asked our residential address and we told him we didn't have one. It must have looked unconventional, with a 9-year-old, 5-year-old and 2 month-old blinking at him from the back seat. 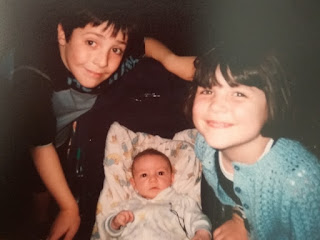 Now that it's come to the nomination part, I'm not really much of a pass on the baton type of person, but will try to come up some of my favourite blogs, who I'll contact personally. Meanwhile, if you'd like to give this a go anyway, I'd love to see 7 interesting facts.
Posted by Paula Vince at 5:00 AM