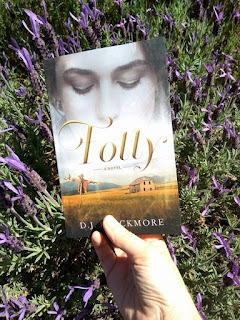 It is 1822. The colony bells of Newcastle chime for a wedding but Emma Colchester is uneasy. Her cousin is nowhere to be found. A red satin ribbon unearths the truth, and the family face their worst fears. Fingers of blame are pointed too close to home and Emma's future with Tobias threatens to unravel. The walls of The Folly standing by The Hunter River hold the clue, and Emma risks everything in finding out the truth.

MY THOUGHTS:
This is the sequel to Charter to Redemption, returning us to the drama of colonial Newcastle with a varied cast of characters, including convicts, free men, red-coated constabulary and the handful of ladies brave enough to live among them all. There's even a brief glimpse of the natives of the land. It's always refreshing to see an Australian historical novel written by an actual Aussie. The authenticity can't be faked.

The setting reminds me of visits to tourist colonial villages, but for real with all the sensual details. It would be great to journey back in time to sample the food, including damper, treacle tart, mutton broth and saddle of beef, not to mention experiments of kangaroo meat, which the settlers decide tastes like 'a mouthful of rat.'

Tobias and Emma expected to live happily ever after, but it's never that straightforward in the colonies. Tobias is in a lot of hot water through no fault of his own, but just a lot of circumstantial evidence. Readers of the first book will remember that being a convict wasn't his fault either. Is he the unluckiest man in New South Wales? This time Tobias is heading straight for the noose unless something miraculous happens. An interesting question underlying the story is the extent to which a man's good behaviour and sound values may vouch for him when he needs them to.

The story doesn't turn a blind eye to the gruesome, seamy side of life. The town is reeling with the murder of two women, one young and one old, both strangled with their own hair. And corruption and negligence within the constabulary itself doesn't make things easy. Commander Morriset has his hands full being in charge of the rabble. Adding a bit of comic relief is Tam and his mate Jim, who has a knack of walking into scenes he wasn't supposed to see.

If I have one gripe, it's that the presentation detracts from the story at times, with several typos (such as tying the not instead of tying the knot), dialogue not always easy enough to determine who's speaking, and sentences that could use a bit of tightening. When this occurs enough that I start to notice it, I feel obliged to mention it in a review. A more thorough proofread could have made a world of difference to the overall quality. However, on the whole it flows like a very enjoyable campfire yarn with all the colourful jargon of the times. And the descriptive writing so often puts us right in the picture.

Readers of romance may be assured it's alive and well in the new colony, despite harsh living conditions. Emma's sweet cousin Phoebe and her new husband Rory are expecting a baby, and Emma never gives up hope of a future with Tobias. 'As long as there was love to keep one another warm, a pail could always be found to catch the drips from a leaky roof.'

I wonder if there will be a third to make this a trilogy.

Thanks to the author for providing me with a review copy.
Posted by Paula Vince at 5:00 AM