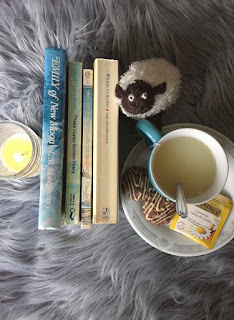 I'm sure we've all battled this beast at some time or another, and tried counting thousands of sheep. Thankfully I've never been a chronic sufferer, but it's caused terrible frustration on random nights, when I've joined the ranks of keyed up mortals googling books with titles such as Desperately Seeking Snoozin'. I'm sure all these purchases must be made at 2 or 3 am.

Sleep experts suggest not lying there stewing, but getting up to work or read a book. So I've compiled this list for times when you might need it. And take my word for it, there's nothing much around like what I'm about to offer. If you google 'insomnia stories' you'll be more likely to find a litany of true woe-is-me anecdotes from poor suckers, rather than fun lists of literary gems. Call this the Insomnia Hall of Fame if you like, proving that we're in good company.

I'll start with the desperate and sinister side of insomnia (just to prove that things might be worse).

1) Shakespeare's Henry IV Part 2
I think this might have been guilt-induced sleeplessness. Henry had Richard II deposed so he could claim the throne, but now the poor wretch trudges the palace passages all night long, groaning because his poorest subjects are that moment enjoying the luxury that's denied to him. 'O sleep, o gentle sleep, nature's soft nurse, how have I frightened thee?'

2) The Yellow Wallpaper
Charlotte Perkins Gilman came out the other side of what she considered a bout of near madness, and wrote this story to help process her experience. The main character, who probably suffered a bout of post natal depression, is ordered to relax and recuperate, but the yellow wallpaper in her bedroom starts sending her around the twist. She lies awake all night to the point where she believes other women may be confined behind it. From there, it's an easy leap to assume that she might even be one of them! No wonder she can't sleep.

3) Stephen King's 'Insomnia'
Ralph Roberts not only has to put up with the frustration, but also experiences disturbing visions with his. He can detect auras around people, and also sees a strange race he dubs the 'little bald doctors', who are engaged in a terrible battle against the Crimson King.

4) Laura Ingalls Wilder
In 'These Happy Golden Years' she describes a tough time she had while she was teaching far from home, and boarding with the Brewster family. Mrs B used to lose her cool and brandish the carving knife, making desperate threats of murder or suicide. She was a very unhappy lady. So was Laura, when she found herself lying awake, staring into the darkness, ever alert in case she was the unlucky victim.

5) Emily of New Moon
The poor little heroine is staying with her Great Aunt Nancy. She's convinced that the chimney behind the head of her bed is haunted, because it's full of sinister sounds. Each night she lies awake, frozen with terror, until somebody tells her that the commotion isn't coming from ghosts, but from a flock of nesting birds. Whew! I think I'd still prefer silence, but it did the trick for Emily.

6) The Moonstone
This is my favourite of the lot. Poor Franklin Blake was addicted to tobacco but gallantly tries to quit cold turkey, because Rachel, the woman he loves, hates the smell in his clothes. As a withdrawal symptom, he suffers successive nights of terrible insomnia until Mr Candy, the doctor, decides to end his misery by sneaking a drop of opium into his nightcap. That sets off a catastrophe for poor Franklin that takes him months to get to the bottom of. I've reviewed it here.

And the next lot of stories are about times when insomnia proves to be productive.

7) Tom's Midnight Garden
Poor Tom finds it hard to sleep while staying with his aunt and uncle, so he slips out of bed to wander around undetected once they're asleep. If it hadn't been for his nocturnal exploring, he would never have made his astounding discovery. My review is here.

8) The Lion, the Witch and the Wardrobe
Lucy and Susan can't get to sleep one night. They can sense that something ominous is in the air. When they creep out of their tent for a moonlight walk, they stumble upon their beloved Aslan at a crucial moment in his life. The girls are able to offer the great lion some much needed comfort and support before he bravely sets off to the Stone Table, to meet the White Witch and her minions.

The final three are straight from the Bible, so if you'd like to think of it this way, perhaps your insomnia could be part of a divine plan :)

9) Jacob
He was too uptight about meeting his brother, Esau, to fall asleep. The meeting was set for the following day, and Jacob had no idea what sort of reception to expect. So he took a stroll away from the campsite, and ended up spending the rest of the night wrestling with a powerful warrior. When it dawned on Jacob that the man was the Angel of the Lord, he summoned his nerve to ask for a blessing. What a missed opportunity it might have been had he fallen asleep.

10) Gideon
It was the night before a huge battle against the Midianites. The leader of the Hebrew army understandably couldn't sleep. He wiled away the hours by creeping off to the enemy's camp, where he overhears two soldiers discussing their terror of the Jews. One of them (who obviously didn't share Gideon's insomnia) describes a prophetic dream that they will certainly lose to Israel. Gideon takes it as an excellent sign and returns to his own camp with his courage restored.

11) King Artaxerxes
This mighty Persian ruler has an inexplicable bout of insomnia one night, and decides to try lulling himself to sleep by reading some dry historical records. Sounds like the right idea. His reading reminds him that a Hebrew named Mordecai had done him a great service long ago, and had never been rewarded. Behind the scenes, the king's wicked advisor, Haman, is plotting Mordecai's downfall. This was nipped in the bud, so the king's insomnia helped Mordecai's life.

Maybe this list is a good start to give us a sense of comradeship during those moments when sleep eludes us. Getting stuck into these books may also help give us the zzzzs, which is what we really want. Please let me know if you can think of any others.