Star Rankings - A help or a hindrance? 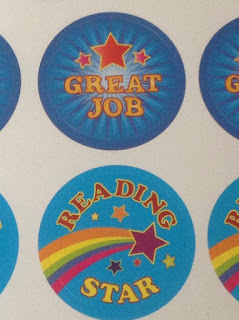 It turns out that a man named Edward O'Brien was responsible for this system I've both loved and hated. He was an author/editor who was working on an anthology of short stories around the turn of the last century. For his own filing ease, he decided to give each one a ranking of one, two or three stars, depending on whether he found them great, okay or deplorable. O'Brien's idea caught on among his peer group, or if they'd lived in our time it might be said to have 'gone viral'.

Eventually, his original three star ranking system expanded to the five star one we all know so well, for it's used for pretty much everything from motels and restaurants to cosmetics, household appliances and books. When it comes to books, I've had plenty of experience with stars, both on the giving and receiving end.

While I've had my author hat on, I've been warned by people who have expressed interest in reviewing my books, 'Just so you know, I rarely give five stars.' What do they expect in reply to that? Probably something like, 'I appreciate your honesty and all reviews are welcome,' which is what I do say. Even though that's true, I find it a bit sad that their high standards cause them to begin each book expecting to find something to lower their rankings. With that attitude, I'm certain they will. (When I put my reviewer hat on, I never say that to anyone. I prefer to approach every book hoping it will be a five or at least a four.)

I discovered an article by a couple of authors who have made an interesting point. In their opinion, deep in our hearts, we never regard the star ranking system as the simple scale it professes to be. Instead, it's actually a binary system consisting of only two levels, Pass (5 stars) and Fail (4 stars and less).

(How many people do you think are secretly a bit like Chandresh Christophe LeFevre, a character from 'The Night Circus' by Erin Morgenstern? He savagely flung knives across the room at a glowing review he'd clipped from the paper, simply because it reported his spectacle as 'almost transcendant'. He took offense at the world 'almost' and decided he must be doing something wrong.)

But when you really think about it, nothing suggests a phony set-up more than a book which has only a handful of five star rankings, because the general public differ so markedly in their tastes and responses. In these cases, even if the author didn't rustle up a number of friends and relations to do them a favour, it certainly appears that way. (If a number of these happen to be 'one review wonders' or share the same surname as the author, it looks even more fishy. See my review of How to get good reviews on Amazon by Theo Rogers.) Fours are quite acceptable, thank you very much, and the majority of books seem to get the occasional ones and twos, because we're all so different, and the world is full of trolls

Do you think it would be nice to cut through all the angst and second guessing? Star rankings can evoke misleading impressions when they stare us in the face. People have told me, 'An author got upset because I gave their book three stars, but I don't understand why. Three means it's pretty good, doesn't it?' Well, I can tell them why. The sight of three stars out of five may scream ho-hum, mediocre, luke warm and lacklustre to some people. And as for a single star, I came across one reviewer who wrote about someone's book, 'This trash doesn't deserve any stars at all and I hate being forced to give it one, but had to, as it's necessary for me to post my review!' Why don't we scrap star rankings altogether and use emoticons instead, to give a broader impression of our visceral responses to the books we read.

for 'Anne of Green Gables'

for 'The Book Thief'

I think that would work for me, because my rankings are based on the emotions they stir up anyway. When it comes to books many things can influence a ranking, but I think focusing on just one makes them more consistent across the board. I ask myself these sorts of questions? Did the author pour a lot of heart and soul into this book? Do I still dream about these characters after I finish the story? Do I hear their voices in my mind? Did I laugh or cry out loud? If the answers tend to be 'yes', then I've been known to give 5 stars even if the writing craft isn't quite right. In fact, if those technical issues are a bit off, yet the book still hooks me, it may be argued that it deserves five stars more than ever!

I'd give emojis my vote if I was asked, but I don't think it's something that will happen in the short term. We'll keep up our star-gazing, wondering what inscrutable reasons people have chosen to rank our books, and try to be fair and honest in our rankings of others. That's where a good review is invaluable. I try to explain reasons for my ranking, so that they're clear to anybody who wants to read them. Whether or not you agree with them, at least they're laid out, plain, simple and fair. And I appreciate it when others do the same for me.
Posted by Paula Vince at 10:46 AM