'Henry and Banjo' by James Knight 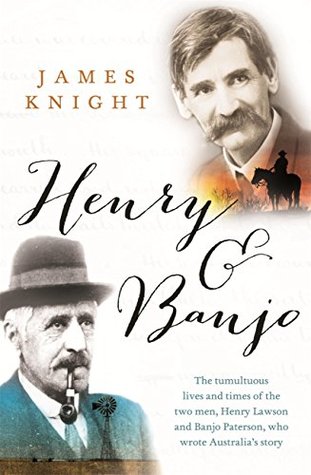 The fascinating lives and turbulent times of Henry Lawson and Andrew 'Banjo' Paterson - the two men who wrote Australia's story.

Today most of us know that Henry Lawson and Andrew 'Banjo' Paterson were famous writers. We know about Matilda, Clancy of the Overflow and the Man from Snowy River; The Drover's Wife, While the Billy Boils and Joe Wilson and his mates, but little else. Here, in a compelling and engaging work, James Knight brings Henry and Banjo's own stories to life. And there is much to tell.

First off, they were born just three years apart. I never realised our two famous Aussie colonial poets shared so many similarities. They started having their work published in Sydney's paper 'The Bulletin' about the same time, and both were regarded as proteges by the proprietor/editor, J.F. Archibald. Their fathers died within a short time of each other, both aged 56. Both young fellows started keeping an eye on each others' work, and most importantly, they were both 'looking for the same reef' as Banjo expressed it.

But by the same token, there were many gaping differences. Andrew Barton Paterson, who was known as Barty, was born into a family with quite a few connections. He was related to Edmund Barton, our first prime minister, on his mother's side of the family, had a private school education and became a solicitor, which bored him. Henry Lawson was born into a struggling family trying to make a go of it in the bush, and had major struggles with depression and alcoholism. While Banjo romanticised the bush, Henry highlighted the toil and heartache. They worked with the same subject matter, colonial Australia, but each focused on different sides of the same coin, and it could be argued that both angles were true.

I enjoyed these glimpses of the pair of them. On one hand, they were illustrious Australian poets worthy of studying in school. Yet we see them here as a pair of spirited young rivals in their 20s having a war of words for ratings and having (mostly!) friendly digs at each other. I'd never heard about the competition they cooked up between them. It was awesome, and sent me off searching for the poems which were weapons in the battle. This is a book you won't want to read without doing lots of google searches just for fun.

It's not as simple as saying that Barty was born with more opportunities than Henry, since Henry comes across as one of those tragic, melancholic souls who managed to squander all the good that came his way. I wanted to shake him for his self-sabotage. His relationship with his mother Louisa, famous in her own right, is shown here as complex and not always amicable. She warned her young friend Bertha Bredt, 'Don't marry Henry.' The girl replied that she was going to, because she loved him so much. History shows what happened. Henry's mother was right.

Banjo strikes me as our Australian version of Shakespeare, since young modern people enjoy a lot of what he created without even knowing it. They may watch 'The Man from Snowy River' movie, and sing 'Waltzing Matilda' oblivious of the young man who created them. He seemed to get sparks of sudden inspiration from events in his life. That made it really interesting to read how works I've already mentioned plus 'Clancy of the Overflow' came to be written. I'll tempt you by saying that 'Waltzing Matilda' turned out to be full of romantic faux pas for him.

It's a book which left me with many questions to ponder. Did each of them find that life delivered exactly what they expected it to? The philosophy that life is our mirror seemed to be borne out for them, with the more sanguine Barty taking blows more cheerfully in his stride than sensitive Henry, who absorbed heartache and took everything so hard. And they're known as 'the men who wrote Australia.' Does that mean we're getting an accurate impression of colonial Australia from their work, or is it coloured by their own personalities? For example, are we getting an overly rosy picture which Barty romanticised it to be from his own longing to be out of his office?

I'm glad to have read this book. Even though they're both long gone, their characters seemed to come alive. I find it easy to imagine Henry grumbling, 'He keeps misrepresenting what it's really like in the bush. How does he always manage to fall on his feet?' and Banjo face-palming, and saying, 'What's he up to now?'