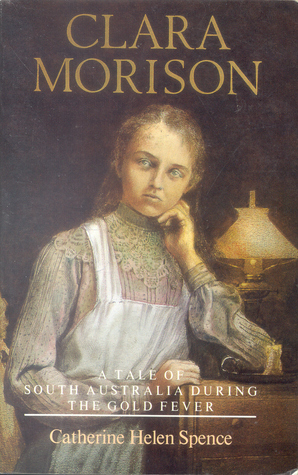 2015 Reading Challenge, Week 32 - A book that takes place in your hometown.
That's Mount Barker, in the Adelaide Hills, but apart from some of my own novels, it would be pretty hard to find a story set there specifically. I'm broadening the category and going for my city instead. I've lived in different parts of Adelaide in my past, and we still find reasons to commute down there frequently. These days, Mount Barker is considered more a suburb of Adelaide than a town in its own right, as it used to be, anyway.

Set in Adelaide in the early 1850s Clara Morison tells the story of a young educated woman who migrates to South Australia from Scotland kwowing very little of her new home. Clara finds work, battles illness, discovers relatives and slowly finds her place in the struggling colony. Her story, which reveals the fine details of colonial domestic life, is set against the turbulence of the gold fever when men and money streamed out of South Australia to the goldfields in the eastern colonies.
The problems of a new and vulnerable colonist and the atmosphere of public and private financial upheaval are successfully recreated by Spence, making Clara Morison by far the finest novel of colonial South Australia.

After the death of her father, Clara's uncle has no room for her. Her sister, Susan, may at least be useful as a family governess. Clara 'reads aloud with exquisite taste' and can tell you where to find information right down to the page number, but those skills are unmarketable. He comes up with the bright idea of sending her to South Australia, where he believes they're in no position to be choosy. 'Everybody who can do nothing at home is sent out as quite good enough for the colonies.'

It's not as easy to find employment as a lady's companion as they expected, and Clara has no choice but to accept the position of household servant with Mr and Mrs Bantam. In Adelaide, she comes across distant family previously unknown to her, and also falls in love.

The picture of Adelaide life in the colonial era is wonderful. Spence was a woman of the actual time period. This was published in 1854, so her impression of the new settlement is genuine, not written by some modern author who has studied history books and hazards a guess what it must have been like. The descriptions of fledgling businesses on familiar Adelaide streets made me feel as if I was right there. The impressions the characters have of the city layout, one-storey, non-thatched, bull-nosed verandah homes, dusty roads, and unusual flora and fauna would have surely been authentic. I was proud of how the characters show up as people with such a lot of energy and optimism, as my ancestors would have been among them.

Clearly, Spence expected everyone to sympathise with her main character, but I couldn't warm to her. Clara is quick to sum people up as inferior, coarse or vulgar, and spends a lot of time quietly looking down her nose. She's flattered when handsome Mr Reginald considers merry Miss Waterstone 'her companion merely, and not her friend.' Later, she judges him based on his choice of reading matter. 'I cannot read such trash as this. If he admires it, he has not such a fine taste as I expected from him.' (It's revealed a bit further on that the dime novel wasn't even his.) Here's my gripe. The story's villain, the aptly named Miss Withering, is shown up as a social snob, a definite no-no in the new colony. Yet Clara is an intellectual and literary snob, and we were supposed to love her! Talk about blind spots.

It's surprising to read how quick these colonial folk were to assess others neatly on the basis of first impressions and appearances. They'd throw around words like 'ugly' and 'dumb' without a thought. Clara thought the German people working at the Beauforts' were 'very stupid looking' and considered kind Mrs Handy 'a commonplace, talkative woman without any refinement or delicacy of feeling.'

My favourite part by far was the letters sent home from the boys on the goldfields. I liked the Elliot brothers and their friends, who seemed down-to-earth. Their experiences were really interesting, including their contact with Alexander Tolmer, our real-life police sergeant.

For fellow Aussies, it's interesting to see the good old, traditional rivalry between South Australia and Victoria already firmly in place. Several characters make sure to convince others that Adelaide is far superior to Melbourne, 'even though they look upon us with pity and consider us completely eclipsed.' After his experience on the goldfields, the character William Bell says, 'I have not met a South Australian who did not mean to return.'

Overall, I think every person who lives in Adelaide should read this, for the great detail about life in bygone times. Imagine the Torrens being the main source of the city's drinking water! I also had fun trying to picture a time when Adelaide was seen as a sort of women's settlement, because the men were all heading off to Victoria looking for gold. It's fairly upbeat and ends well for most main characters. Long after the book finishes, you imagine Clara and her like-minded hubby sitting by their fire, discussing other people's shortcomings and making snarky, personal remarks.

Here I am in the city beside a statue of the author, Catherine Helen Spence, who was also known as The Grand Old Woman of Australia. As well as writing novels, she became an advocate for child welfare reform, and also became Australia's first female political candidate. She's someone we can be proud to claim in our Adelaide heritage. Although I'm not sure I would have lived up to her standards of merit if I'd known her, she did have a sense of humour. 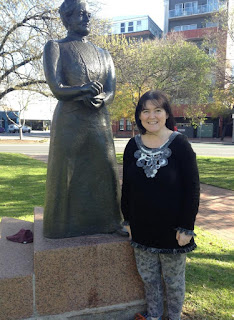