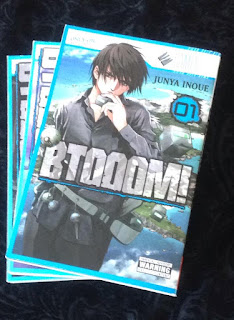 For this part of the challenge, I knew I need look no further than my daughter's shelf. Btooom! is a Japanese Anime, and one among many which Emma (aged 16) loves. Well, if I was expecting something similar to the Archie and friends comics I enjoyed when I was young, I had a lot to learn. These graphic novels open from the back cover, for a start, and you must read the pages from right to left. Surprisingly, that didn't take as long to get used to as I expected. Once again, this is something I wouldn't have chosen to read on my own, but the challenge prompted me to broaden my horizons.

Ryouta Sakamoto is 22 and unemployed. To the rest of the world, he looks like an apathetic loner who sits in his room playing computer games. When his mother tries to help him find traditional work, he snaps at her to stop bothering him while he's online (which appears to be always) because he has important priorities which she cares nothing about. In the world of his role play game, Btooom! he is among the cream of the crop, and hopes to secure a job as a game tester with the creator's company, Tyrannos, Japan.

One day, he wakes up to find himself on a jungle island, and discovers that a number of people have been plucked out of their real lives, apparently to play Btooom! for real. Even though survival and self defense come into play, killing people for real is a more sober moral dilemma than simply playing the game online. Along with having to figure out the rules in real life, and the functions of the different explosives (aka Bims) Sakamoto has suspicions about who is behind the whole set-up. Naturally, he wants to escape from the twisted game world, but still has a lot to learn, which gradually unfolds. How did he and the others find themselves there in the first place? Who is the mysterious girl in the high school uniform who seems to possess a good amount of food supplies and Bims?

Even though I'm not the target audience, the graphic novels held my interest and I'm willing to find out what happens further on. The plot has obvious similarities to Hunger Games, but quite a bit of its own intrigue, making us want to get to the nitty gritty and find out who sent them there, how it was done, and what are the personal agendas of several people on the island. It's the sort of story which has room for a bit of character development as well as full-on action. Ryuota Sakamoto isn't the nicest person at the start, but the story has flashbacks to his personal history, which makes the lessons he learns about loyalty and who he can trust more meaningful.

I've only read the three which Emma owns at the moment, and if I want to read more, I have to go online, so I'm not sure how the story will end, although she tells me it's excellent. 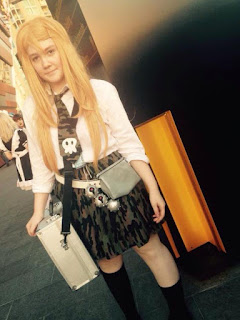 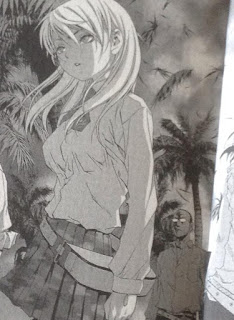 My daughter, Emma, cos-playing as the lead female in Btooom! at AVCon recently, including a blonde wig.