'The Bracelet' by Dorothy Love 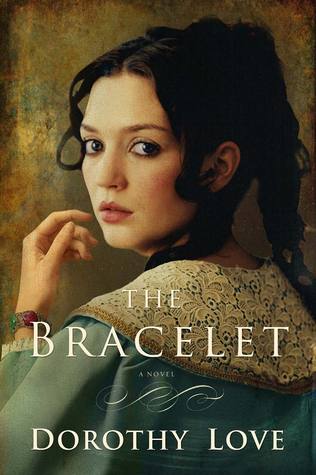 The mystery surrounding Celia's home in Savannah threatens her family reputation . . . and her very life.

Celia Browning is counting the days until her childhood sweetheart Sutton Mackay returns to Savannah after two years in Jamaica looking after his family's shipping interests. She's certain he will propose marriage, thus joining two of the city's most prominent families. But just as Sutton returns, an unsavory newspaper reporter arrives in town, determined to revive interest in the secret tragedies that occurred in the Browning mansion on Madison Square when Celia was a child.

A series of mysterious notes arrives at the house, followed by an anonymous gift--a bracelet imbued with a sinister message. Is it merely a coincidence, or is someone out to harm her?

As war clouds gather over Savannah and her beloved father's health worsens, Celia determines to uncover the truth about what really happened all those years ago.

Inspired by actual events in one of Savannah's most prominent 19th-century families, "The Bracelet "combines romance, rich historical detail, and breathtaking suspense as one young woman embarks upon a dangerous quest to free herself from her family's tragic past.

The story is set in the time of political turbulence prior to the American Civil War. Celia Browning is reunited with her childhood sweetheart, Sutton Mackay, who has been abroad. She expects a proposal any day, but her happiness is marred when a snooping journalist threatens to write an expose about a scandal in her family's past. Celia never really grasped the details. If she doesn't ferret out the truth, it will wreck their reputation. Especially since somebody is sending her threatening messages and the gift of a bracelet with a sinister meaning.

The story did hold my interest despite the slower patches. The general feeling of time and place was well evoked. In modern times, having such a scandal exposed wouldn't be such a big deal for all concerned as it was for Celia and her family. There are plenty of sudden, shock revelations for those who persevere and discover the mystery. So many that even though I predicted some, others took me by surprise.

I'm sure every reader will agree when the 'baddie' is revealed, that it's a complex, non-stereotypical villain. There may even be discussions about whether this person deserves censure or pity. I certainly found it easy to feel sorry for the perpetrator, and understand where they were coming from.

Thanks to Tyndale House and NetGalley for my review copy.