'The Sacred Year' by Michael Yankoski 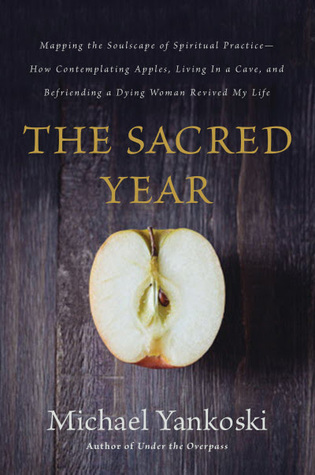 Frustrated and disillusioned with his life as a Christian motivational speaker, Michael Yankoski was determined to stop merely "talking" about living a life of faith and start "experiencing" it. The result was a year of focused engagement with spiritual practices--both ancient and modern--that fundamentally reshaped and revived his life. By contemplating apples for an hour before tasting them (attentiveness), eating on just $2.00 a day (simplicity), or writing letters of thanks (gratitude), Michael discovered a whole new vitality and depth through the intentional life.
Guided by the voice of Father Solomon--a local monk--Yankoski's Sacred Year slowly transforms his life. Both entertaining and profound, his story will resonate with those who wish to deepen their own committed faith as well as those who are searching--perhaps for the first time--for their own authentic encounter with the Divine.

I'm so glad I read this book because I almost let the opportunity slip past. Books in which authors embark on spiritual journeys have seemed a bit gimicky in the past, as if they're seeking attention, and sort of shallow. I'd ask myself how indulging in each discipline for such a short time could allow them to get an accurate picture? But I'd heard good things about this book, which made me curious to read it after all.

Michael Yankoski was disillusioned at a Christian conference at which he was a guest speaker. (It had a name like 'Change Your World' something as audacious and cheesy as only a crowd of well-meaning Christians can be, he says.) He witnessed all sorts of drama from prima-donnas and broken people backstage which didn't match their polished, crowd-pleasing on-stage personas. Discouraged by all the falsity, he headed to a monastery retreat centre, where he met Father Solomon, who suggested that Michael dedicate himself to a number of spiritual practices for a year.

I love this book because rather than just going through the mechanics of each of them, Michael delves into the madness of the world and quirks of human nature which make each of them so beneficial. We spread ourselves too thin, sacrificing depth in favour of breadth in our activities. We automatically assume false selves to suit occasions, choosing from a wardrobe of masks we don't even realise we own. We emphasise external productivity at the expense of contemplation, and we get overly attached to the things we produce. We are quietly terrified that if we don't stop 'swinging our hammers' of productivity, we'll sink into insignificance.

So he tries a variety of disciplines to overcome the twenty-first century mold he found himself pressed into. He contemplates the surface of an apple, gets lost several times, bakes his own bread from basic ingredients, observes the Sabbath, volunteers at a local hospital and tries communal living, to name a few. He even retreats to a cave like a hermit, and digs a grave. (His chapter about coming to terms with our eventual death was one of my favourites, even though I usually shy away from the idea.)

Michael makes it clear that we don't do these actions out of some misguided attempt to earn our salvation, which is already a free gift of grace. It's more that we want to position ourselves to detect and reflect God's grace, rather than just being rushed through life, ignoring it. It's not a book you'll want to read through in a hurry. I'd recommend you take it as a gift, and a personal tool to savour and reflect. I've saved it among my favourites, to dip into often whenever the mad world gets too stressful.

One of my favourite quotes is made by Father Solomon, who told Michael at their first meeting, 'A carnival is a wonderful place to go every now and then, but a terrible place to live.' From that moment, I was keen to see how he'd go in his attempts to escape the carnival we all know so well.

There's plenty of challenge for us to try some of these disciplines ourselves, or all of them if we dare!