'The Brickmaker's Bride' by Judith Miller 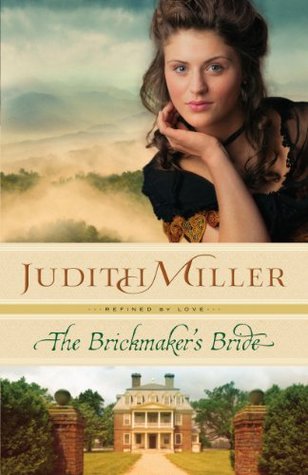 Yearning for a fresh start, Ewan McKay travels with his aunt and uncle from northern Scotland to West Virginia, promising to trade his skills in the clay business for financial assistance from his uncle Hugh. Hugh purchases a brickmaking operation from a Civil War widow and her daughter, but it's Ewan who gets the business up and running again. Ewan seeks help from Laura, the former owner's daughter, and he feels a connection with her, but she's being courted by another man--a lawyer with far more social clout and money than Ewan. Besides, Ewan has resolved he'll focus on making the brickmaking operation enough of a success that he can become a partner in the business
and be able to afford to bring his sisters over from Scotland.

But when Hugh signs a bad business deal, all Ewan's hard work may come to naught. As his plans begin to crumble, Laura reveals something surprising. She and her mother may have a way to save the brickworks, and in turn Ewan may have another shot at winning Laura's heart.

MY THOUGHTS:
As her father was killed in the war, Laura and her mother feel compelled to sell his beloved brickyard, and the only people who seem to be looking to buy in the economically tough times is an uncle and nephew partnership from Ireland, Hugh and Ewan. But are they quite on the level?

This book is a good example of why it's sometimes good to persevere beyond first impressions. I had initial preconceptions of both main characters which I had to push through, and it was worth it.

At first, Laura's self-assurance bordered on brash, especially for a young lady of those times. The explanation is given that she had to watch her mother learn to speak up for herself the hard way, which is fair enough, but Laura's outspokenness seems to go beyond the bounds of self-defence. She certainly knew the ins and outs of her father's business to the extent that her mother would entrust her with such an important matter as the sale of the family business. (I'm not sure it was ever explained why Mrs Woodfield didn't go along on that occasion, even though she wasn't sick.)

Laura has a good heart, but I couldn't help feeling all through the book that if I knew her personally, I'd probably find her one those annoying friends who contradict people all the time. In fact, it would be an interesting exercise to go back over all her dialogue. I'm sure the percentage of times she delivers a rebuke or puts somebody else in their place would have to be high.

Still, when we discover Laura's personal secret which has kept her heartbroken since she was young, it gives her a vulnerability which she lacked earlier on, and we can't help feeling for her. And if the rather wimpish Kathleen is the alternative type of heroine, Laura's forthrightness is probably preferable.

My first impression of Ewan was that he was one of those perfect, 'what a guy' types. Some heroes start off flawed and develop good character traits as they go. As Ewan seemed pretty awesome to begin with, I couldn't see what the plot could possibly draw out of him. That was before I saw him floundering way out of his element, trying to secure future customers for the brickyard, cope with Laura's sarcastic suitor, Winston Hawkins and learn silly etiquette rules all at the same time. I was right on Ewan's side from then on!

I loved Ewan's three sisters, and Uncle Hugh's relationship with Aunt Maggie is fun to read about, leaving readers to decide for ourselves whether their marriage is happy or not.

The parts to do with running the brickyard are well researched and interesting. Down in my city is an old brick works which has been turned into a market, and I love this glimpse into how it would have functioned back in its heyday. The historical times were certainly different to now. Laura and her mother were determined to stay living in their mansion, yet in twenty-first century times, they probably would've considered it far too big for just two women and wanted to put it on the market along with the business.