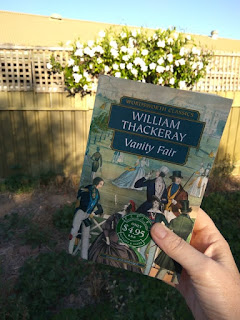 A novel that chronicles the lives of two women who could not be more different: Becky Sharp, an orphan whose only resources are her vast ambitions, her native wit, and her loose morals; and her schoolmate Amelia Sedley, a typically naive Victorian heroine, the pampered daughter of a wealthy family.

MY THOUGHTS:
Here's my choice for the Classic Adaptation in the 2020 Back to the Classics Challenge. We are to choose any novel that's been adapted as a film or TV series, so I thought I'd take the chance to read Vanity Fair and also watch the highly acclaimed BBC series from 2018. I was soon engrossed in this family drama set between 1815 and 1830, but published as a serial throughout 1847. I can quite understand why Thackeray's readers would have been panting for the next installment. It drops us right into scandal and intrigue and even whisks us off for a while to the Battle of Waterloo.

It all starts when two young friends graduate from finishing school and head off in a carriage together. Even though they seem fond of each other, it's soon clear to the reader that they have nothing remotely in common beyond heading for a week to the same destination.

Amelia Sedley is the soft-hearted daughter of a wealthy stockbroker. She's returning to her family home and looks forward to marrying her sweetheart George Osborne; a match preordained by both families from their babyhood. Amelia is the type of girl others automatically take care of and make decisions for. Conveniently for her she's madly in love with the boy they've chosen, because Amelia sets her tender heart devotedly on those she loves, blinding herself to their faults. When things go pear shaped, as they tend to do in the dog-eat-dog Regency era, she's the sort of victim who's always first to crumple. Amelia is a real canary in the coalmine type of character. Thackeray calls her a 'harmless lost wanderer in the great, struggling crowds of Vanity Fair.'

Her friend Rebecca Sharp on the other hand, is an orphan who relies on her street smarts and social awareness, since she has no relatives to look out for her. Becky has set her scheming heart on ascending to the top of the social ladder, which means she has no room for useless emotions like love to make her vulnerable. She's great at faking niceness to the right people, playing on their blind spots and giving them what will most flatter their vanity. But our admiration for an underdog who knows how to play the game changes to horror at her monstrous methods of getting what she wants. That makes this such a fun book. Our own sense of justice is kindled, and discussing the story with others becomes an exercise of comparing the moment we first saw her true colours as an unscrupulous con artist.

There's always an interesting contrast between Becky's callous lack of love for anyone, and Amelia's smothering excess of that same emotion, poured out on undeserving targets.

Becky intends to spend a week with Amelia's family before moving on to a post as family governess to a baronet named Sir Pitt Crawley. Unwilling to let any opportunity slip, she first attempts to seduce Amelia's brother Joseph, then tries her chances with the Crawley family. Sir Pitt's second son Rawdon is a simple, sporty, macho-man and gambler who expects to inherit lots of money from his wealthy aunt, with whom he's a favourite. So he becomes Becky's next target. Although he never dreams he's just a stepping stone in her selfish machinations, we know that's just what he is. And he's caught up in the mess when Becky's carefully crafted plans backfire on her.

Although Becky's clearly a gold digger, innocent Amelia sets us groaning for other reasons. She has so many good qualities. She's self-sacrificing, long-suffering, a model daughter and sister. Yet there's a strong sense that Thackeray doesn't intend us to approve of the way she wraps her whole being around the people she loves, which is a strain for anyone, let alone a selfish brat like George Osborne, or a spoiled, breezy kid like their son. She has all the feels, but lacks discrimination of worthy objects. When the good Captain Dobbin finally wins her hand after years of pining for her love, even he's come to understand that she's clueless, and not really that great a catch. The text puts it like this. 'Grow green again, tender little parasite, round the rugged old oak to which you cling.'

All through the story, Thackeray keeps showing us that money is a personality changer. It's a society in which anyone with decent dough suspects they can't trust claims of devotion from friends and family members. The section in which relatives visit grouchy Aunt Matilda Crawley are hilarious, especially since she sees straight through their ruse. Miss Crawley knows full well that she's a cantankerous grouch who's not at all lovable. Perhaps it's sadness over her family's hypocrisy which keeps her cross, so it becomes a self-perpetuating cycle. The story keeps us psyched up waiting to discover who she finally decides to leave her moolah to.

Becky drops a famous line when she says, 'I could be a good woman on $5000 a year.' She sets us wondering whether raw need makes crooks, or at least unpleasant companions, out of otherwise harmless people. Thackeray's narrator helps us ponder the question with terrific observations such as, 'An alderman coming from a turtle feast will not step out of his carriage to steal a leg of mutton, but put him to starve and see if he will not purloin a loaf.' (I remember having very similar thoughts while reading Dickens' Pickwick Papers, if you'd care to compare.)

Anyway, I love this book mostly for the subtle nuances of its secondary characters. Between the shifting pendulums of our two flawed heroines we have very cool character development of others whose lives are tangled in theirs. We see matrimony and fatherhood have a positive effect on Rawdon, because unlike Becky, he's essentially a decent, normal person. We see their son figure out with childlike accuracy the truth about his mother, which takes adults years to comprehend. We have the unassuming Captain Dobbin, who fills Thackeray's every criteria of the perfect gentleman, including 'an equal, manly sympathy for the great and the small.' And we have Becky's sister-in-law, the awesome Lady Jane Crawley, who knows when enough is enough, because she's been considering Becky's outrageous behaviour, just as we have. These are all favourites of mine, making it a book I'll return to down the track.

This category of Back to the Classics challenges us to also watch and assess the film or series the book is based on, so I'll do that as a separate post I'll link to this. Look out for it soon.