A Great Reason to Re-Read Novels 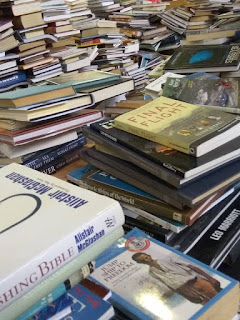 I'm a big fan of re-reading excellent books, although it seems counter-intuitive to my sudden urge to just get through as many as possible. I've finally reached an age in which I realise I'm not ever going to be able to finish as many books as I'd like to. When I was younger (and not even that much younger), I had the illusion that there would always be ample time to read every book that sparked my interest. Not anymore. I'm now aware that my remaining days on earth will be too short to squeeze them all in.

A small part of the change might be knowing I've reached what people consider middle age, and balancing that awareness against the size of some of the books on my to-read list, and also the steady stream of recommendations I see every day from bloggers and instagrammers. But the large part is because my dear Dad died not so long ago, and I can still clearly remember those days when I was young and he was my age. It brings the idea of mortality far closer to home. Even though I hope there will still be decades to read books, my reading time is definitely limited.

But instead of letting that put me in a hurry to buzz from book to book, I'm going to keep making time to re-read at least sections of really good ones. Re-reading books has never failed to impress me with extra insights I always missed the first time through. I believe a normal person just can't take away all the good stuff in just one read. So if you're going to bother reading a good book at all, you owe it to yourself to read it at least once more.

Here's my recent example of how it works. Last month I read A Tree Grows in Brooklyn for the first time, and soaked in every moment, including the time the Nolan kids lost their beloved father Johnny. In one poignant scene, the new widow Katie sends her two children out for some fresh air at night, and they see several reminders of their dad. Francie and Neeley end up sitting together by the roadside and crying until their tears are spent. I shared their pain on a personal level, although Johnny Nolan was much younger than my dad, and I'm a lot older than Francie and Neeley were.

They recover, as we do, and in the last few pages of the novel is a seemingly random incident. Francie Nolan is 17 years old and soon to leave home for college. One evening her brother Neeley runs cheerfully upstairs looking for a clean shirt because he's in a hurry. Francie says there's one washed but not ironed, so she sets up the board to help him out. After a bit of banter with her handsome brother, she watches him dash outside again. It's a sweet way to end the book, but I thought nothing of it. 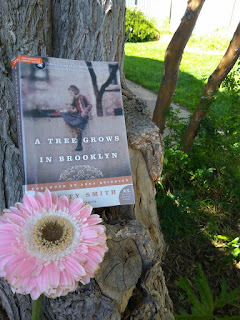 Okay, so when I was planning a review, I thought I'd leaf back to the start to get some fresh ideas. And in the first few pages is another incident I'd forgotten by the time I reached the end. Francie is 11, and her bright and dashing father Johnny runs upstairs looking for his waiter's apron, because he has an unexpected job. She tells him there's one clean but not ironed, and sets up the board to be a good helper. After some hurried, affectionate chatter, she watches him leave and waves goodbye.

Wow, there were such obvious parallels between those two scenes, including how careful Francie was to press around their union badges. The author, Betty Smith, was giving us a really subtle way of seeing one of her best themes. (Well, I admit it's not so subtle in retrospect, or for anyone more on the ball than I was.) She's surely suggesting that although the thread that connects all things may seem tenuous, weak or completely snapped, it's really extremely strong. Having the bulk of the story sandwiched between those two incidents is probably her way of suggesting that there are always traces of our departed loved ones to be found when we search with open eyes; whether it's in the form of memories, belongings, or the DNA of other family members. When Francie thinks, 'Neeley is just like Papa,' she probably remembered that earlier incident which I forgot, even though it was seven years of real time for Francie and just a week or two for me.

That was so meaningful to me I shed a tear or two, and started looking for similar parallels from the life of my dad in the presence of my children. It's a really comforting thought, and one which I wouldn't have got if I hadn't flipped back to the beginning of A Tree Grows in Brooklyn to read the first few chapters. I won't stop re-reading books, because I want to always pick up on other great reinforcing moments.
Posted by Paula Vince at 5:00 AM