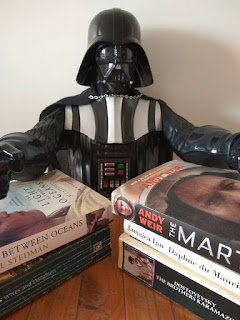 In case you didn't know, today's date is the unofficial, tongue-in-cheek Star Wars celebration day. If you wonder why, just say out loud, 'May the 4th be with you.' And now to celebrate, I'm about to give you this challenge. The rules are simple. Just choose a book to fit each of these categories, based on Star Wars characters. I once did it as an Instagram challenge, but would love to share it on the blog too to mark the occasion. Click on the links to see my write-ups and reviews. Here goes.

LEIA: A book that splits your heart in two.

I choose The Light Between Oceans for that one. It made me 'ugly cry' so hard, I had tears pouring down my face. Although I love home-grown Australian stories, I refused to go to the movies to see the film, because I knew the same thing would surely happen in the cinema.

HAN SOLO: A book you didn't want to read but loved.

The Brothers Karamazov. I had to choose a Russian classic for last year's 2017 Back to the Classics Challenge, but I'd never read any before and felt daunted. Well, it impressed me so much, I'm now on a quest to hunt down more Russian classics to read.

PADME: A book where the character fell in love with the wrong person.

Wives and Daughters, with which I kicked off this year. I'm thinking particularly of Roger Hamley and his love for Cynthia Fitzpatrick, who wasn't really on his wavelength at all. It would've been a terrible match, to the extent that I wished I could get involved and tell them both to wake up.

KYLO REN: A dramatic character we all love.

I'm going with Mark Watney from The Martian for this one. Everyone who reads or watches this resourceful castaway on Mars can't help cheering him on. Who else could keep himself alive by drawing on such flimsy threads, including his own self-made fertiliser and a huge roll of duct tape that seems to never run out? And he does it with such an attitude of generosity towards those who stuffed up, and sense of humour.

Well, I can never go past Hermione Granger when I face a question like this, but I'll also go for Mary Yellan from Jamaica Inn, who had a horrible, heartbreaking and scary year, facing what would make many 23-year-old girls in her position crumple. But she still held her head high and made sound decisions.

FINN: A couple you shipped but didn't happen.

Whoa, I have a whole list here. Why not have a look at them all? But to single out specifics for this, I'll say Luna Lovegood and Neville Longbottom. They were mutual outcasts, sympathetic to the same cause who could have been great together. And the thing is, we just don't know enough about each of their real future spouses to atone for our disappointment.

YODA: A book with a different chronological order.

That sounds tricky to pin down, but I'll choose Wuthering Heights. The story begins at a specific point in time, then delves back into the past, when the first narrator, Lockwood, asks Nelly Dean to relate Heathcliff's history. And also The Time Traveler's Wife, in which the hero Henry's whole life was one mixed-up, chronological disaster, the poor guy.

JAR JAR: A book you found boring and abandoned.

There have been a few but I'll choose On the Road by Jack Kerouac. It fit the bill so much that I don't even have a link to it. I gave it a good try, hoping for the philosophical masterpiece its reputation promised, but got lost somewhere in the sordid morass of people partying and getting drunk with not much else happening. I wanted out.

So those are my choices, and now I'm wondering what yours might be. If you agree with mine or have any alternative suggestions for one or all, please let us know in the comments. And also tell us if you celebrate Star Wars Day in any particular way. I have to say I normally don't, but couldn't resist this challenge.
Posted by Paula Vince at 5:00 AM