'Breakfast at Tiffany's' by Truman Capote 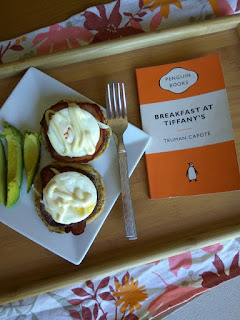 In this seductive, wistful masterpiece, Truman Capote created a woman whose name has entered the American idiom and whose style is a part of the literary landscape. Holly Golightly knows that nothing bad can ever happen to you at Tiffany's; her poignancy, wit, and naïveté continue to charm.

MY THOUGHTS:
This is my choice for the 20th century classic category of the 2018 Back to the Classics Challenge.

It's set in a New York apartment block during the second World War. A young aspiring writer finds himself falling for a mystery girl who lives on the floor above his. But the charismatic Holly Golightly has secrets, two of which are brought to light during the course of the novel. And they are clearly intended to make the reader say, 'Whoa!'

Holly is THE character around which the book revolves. Others love or hate her, but nobody is indifferent. She's the sort of person who will impose on somebody, then get prickly when he shows a subsequent interest in her background. Others may resent that, but our smitten young narrator simply takes it as a challenge. To me,Truman Capote's writing style seems more noteworthy than the story itself. His sparing prose has plenty of clever imagery, and a skillful way of making us sense things that aren't stated outright.

For example, Holly is all about colour and movement. We deduce this from the way she dresses, her apartment's 'fly-by-night' look, and simply what she's written on her card, 'Holiday Golightly, travelling.' It all gives the impression that she's not static, but fluid verging on restless. And it's reinforced by a number of casual references all through, such as her avoidance of the zoo because she hates to see creatures caged. Capote pulls this off with a minimum of words, because the whole story is over in just 100 pages.

Some of the minor characters are summed up in one or two revealing sentences, or even just a phrase. Rusty Trawler, her paunchy, wealthy middle-aged admirer, is a 'preserved infant.' The Brazilian Jose seems as out of place in their company as 'a violin in a jazz band.' And Mag Wildwood is a 'triumph over ugliness' since she accentuates her supposed defects rather than hiding them. It's easy to admire the way Capote saves space on descriptions, yet still makes his point.

The title may be a bit misleading. I think there's something alluring about the mention of food on a cover. Maybe it gives the impression there'll be some homely warmth. Yet nobody in the novel has a meal at Tiffany's Department Store. Holly simply mentions it in passing as one of her aspirations.

But even that turns out to be one of Capote's quick, subtle hints about the flip sides of her character, especially when snippets of her background are revealed. Holly is a girl who has the drive to leave an undesirable situation in search of something better, and the simple opulence of a department store during the war, with luxuries she can't afford, is enough to be her guiding star. I think we're meant to think that she has plenty of drive and gumption, but also naive idealism.

It's one of those stories where the movie possibly surpasses the fame of the book, because the lead role is well cast. I've never even seen it, but it's hard not to picture Audrey Hepburn's pixie face and little black dress as I read, just through taking on the hype over the years. It sounds like Hepburn must have nailed the dual sides of Holly's character; coming across both determined and delicate just by being herself. Holly Golightly could be a hardened criminal, yet she might simply be an innocent girl, dragged into something over her head. I'm sure Hepburn's is the name that springs instantly to most people's minds when someone says, 'Breakfast at Tiffany's' even more than the author's. I put it to the test, and my family had never heard of Truman Capote.

Overall, I wasn't crazy about the plot. My favourite stories are usually longer, not so up-in-the-air, and not focused on just one character. 'Fred' reveals nothing about himself at all. Although he keeps repeating that it's not really about him, it might have been nice to at least know his name. As for Holly, well meh, I didn't get fond enough of the mystery girl to care much what happened to her when she made her secret disappearance. She's always condescending to the narrator, which grated on me. I wonder if I'm in the minority when I say I found the book pretty forgettable on the whole. The shortness is all that saved it from two stars, since it was too short to put aside. Sure, Capote's clever writing was good, but since he didn't intrigue me with his characters, then so what? If you want to give it a try, at least it'll be over quickly if you don't like it. I think the best character is the orange cat.