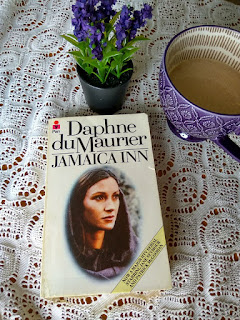 Her mother's dying request takes Mary Yellan on a sad journey across the bleak moorland of Cornwall to reach Jamaica Inn, the home of her Aunt Patience. With the coachman's warning echoing in her memory, Mary arrives at a dismal place to find Patience a changed woman, cowering from her overbearing husband, Joss Merlyn. Affected by the Inn's brooding power, Mary is thwarted in her attention to reform her aunt, and unwillingly drawn into the dark deeds of Joss and his accomplices. And, as she struggles with events beyond her control, Mary is further thrown by her feelings for a man she dare not trust....

MY THOUGHTS:
I read this novel years ago in my teens, and decided to find out how it's stood the test of time.

Mary Yellan has agreed to her dying mother's final request. Mrs Yellan wanted her daughter to find a home with her sister at Jamaica Inn, on the lonely Bodmin Moor. But they had no idea what she'd be walking into. On the way, Mary discovers that the place has an evil name, and the coaches normally just hurry straight past. It's all she can do to make the driver stop to let her out.

Her menacing Uncle Joss Merlyn turns out to be a huge thug with swift mood changes, and the formerly merry Aunt Patience cowers before him like a whipped dog. Joss is involved in a smuggling racket that turns out to be far worse than Mary could have imagined, incorporating the infamous wreckers on the Cornish coast. There's a cast of despicable characters, including a nasty peddler who's a bit like Peter Pettigrew from Harry Potter, rat-like description and all.

The setting is the real hero. Cornwall looms everywhere, and it's not just filler. Without it, the story would be nothing. It's always a perfect match for what's going on, ominous, dark and mysterious. The descriptive passages are great to read, because they make the landscape come alive. When we read it, we might as well be in Cornwall, and if we're lucky enough to get a chance to visit, we recognise it instantly from du Maurier's writing, whether or not we've been there before. (I went once, when I was 20.)

I'd forgotten what a lot of walking Mary does. She travels a huge chunk of the story on her own two feet. Nor did I remember what a strong and fearless heroine she is. Events might shock, sicken and disgust Mary, but nothing frightens her or keeps her down for long. It takes looking back from an older age to realise what a bleak predicament she's in for a 23-year-old. This girl has just lost everything. She's an orphan whose mother has recently worked herself to death in a farming lifestyle that never gave her a break.Youthful idealism has been knocked out of Mary, if she ever had any to start with. She has plenty of common sense and a good dose of cynicism, but I feel a bit sad this time round, as if she obtained it too early. Maybe that's why the romance thread is quite intriguing.

In traditional stories, starry-eyed heroines are anxious to embrace romance and fall for men they deem worthy of their affection. In Mary's case, everything's the opposite. She has no romantic ideals at all, yet somehow still manages to fall for a self-confessed loser. How is that even possible? Especially when a repulsive, older version of the man she loves is always throwing his weight around. The deterrent is none other than her uncle Joss Merlyn, and although his younger brother Jem is far more attractive, they share many of the same physical and personality traits.

Jem is a horse thief who's always grubby and broke and admits that his family have never treated their women well. Mary has seen what marriage to Joss has reduced Patience to, yet can't relinquish her feelings for Jem. There are differences. Jem seems more light-hearted, smarter, kinder and undoubtedly better company, but will these things last? As a teenager, I was saying, 'Come on, he's the better man, just go for it.' But as an older person with a teenage daughter of my own, the risks are evident. Do you still say 'Take the chance' when you consider how long 'happily ever after' may turn out to be? Especially when it will include a nomadic lifestyle with no four walls to call home. I can't believe that I didn't even attempt to balance the pros with the cons in my youth, because the cons are so in-your-face. I think every reader will have to make up their own mind whether or not Jem's charms are appealing enough to take the risk.

I remembered the plot twists and revelation of the ultimate baddie in the mystery. I think it did take me by surprise the first time through. It's all tied in with gullibility and what innocent folk will believe. It's quite disturbing really, not the least that Mary could come to such a wrong conclusion, yet still make the choices she did. The last couple of pages possibly polarise people's opinions the most. I'm split in my own mind, and I'm just one person. She faces a choice between two lifestyles which are mutually exclusive. I'm hoping her choice will work out well for her. One thing in her favour is that Mary surely won't be an Aunt Patience, whatever happens!

Here are some quotes.

Cynicism and sentimentality were two extremes to be avoided. (Yet Mary seems to bump back and forth between them at times.)

There was precious little romance in nature, and she would not look for it in her own life. (Sad for such a young woman to reflect.)

I don't want to love like a woman or feel like a woman. There's pain and suffering and misery that can last a lifetime. (Ironic.)

It's power and glory and women and the kingdom of God all rolled into one. (Joss Merlyn, talking about alcohol. What a waste.)

There's never yet been a Merlyn that died peaceful in his bed. (She can't say she wasn't warned. How big a gamble would it be to expect that to change?)

Well, there was little use in dreaming. The present situation must be faced, and courageously too, if any good was to come of it. (The ultimate motto perhaps.)

And finally, a bit of dialogue to show why we can't help liking Mary.

Jem: Put you in a fine gown and a pair of high-heeled shoes, and stick a comb in your hair, I daresay you'd pass for a lady even in a big place like Exeter.
Mary: I'm meant to be flattered by that, I suppose. But thanking you very much, I'd rather wear my old clothes and look like myself. 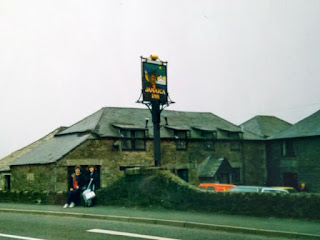 Jem: You could do a lot worse than that, of course.

Here's a photo of the time I got to visit Jamaica Inn for real. This is the place which first gave Daphne du Maurier her inspiration in the 1920s. It's right by the side of the highway now, and the inside includes a few tributes to the novel, including 'Joss' Bar.' I'm sitting out on the stone fence with my Mum. Maybe one day I'll manage to go back somehow, but it's looking like that British holiday was truly the trip of a lifetime.