Why I loved the 'Peculiar Children' series 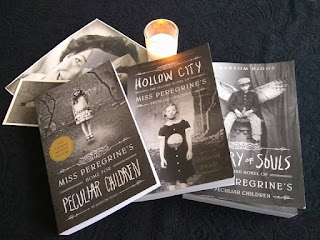 One thing I love about fiction is that we sometimes learn some pretty decent lessons by osmosis. Maybe we can get the same from studying text books, but I prefer a great story. It's like being offered a healthy vitamin. We can choose whether to take it as a bitter pill or a tasty chocolate bar. This series, full of creepy old vintage photos, is presented as nothing more than a funny, fast-paced, often sensational story, yet does it work on our emotions, and maybe even our characters. Here's some of the reasons I recommend these books with the freaky covers, for what they show us.

1) We can try to let go of unhelpful tension.
Until a pivotal moment, the hero Jacob Portman has been gritting his teeth with panic and desperately trying to force himself to face the terrifying hollowgasts. The people he loves are certain fighting the beasts must be his destiny, but he hasn't convinced himself to agree with them in either practice or theory. (Jacob reasons that becoming adept at anything requires practise, but failing at this particular skill even once will result in instant death.) The turning point comes at a critical moment where he believes he's lost all hope. A hollowgast is towering over him with all five tongues lolling, and he accepts that he's done for. Suddenly, Jacob relaxes into it, and finds strange new words and commands flowing to his tongue which immobilise the beast. Jacob is amazed. He knows while he's on edge, using every nerve to figure out what to do next, problems pile up, and he finds himself beaten around by circumstances. Perhaps we readers can use the storybook analogy to help face our own monsters, whether they be depression, panic attacks, fear, or anything else.

2) We mustn't be quick to write anything off as impossible.
In other words, keep an open mind.
I love how Enoch and Hugh start scoffing at the plausibility of what they assume is a very tall tale. Bronwyn has been reading the younger children a story from 'Tales of the Peculiar'. They instantly state how ridiculous and impossible it is to believe. Then Jacob says in effect, 'Come on guys, just a few weeks ago, I thought the exact same thing about the existence of people like you.' They can't help grinning when they get what he means. We should keep our minds open. Only foolish people who believe they're wise are quick to instantly dismiss new ideas as implausible. 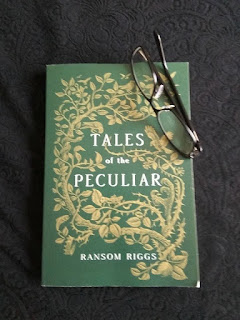 3) We should aim to understand what drives us.
Don't go the opposite extreme and believe everything you hear either.
Miss Peregrine's brother Caul, the ultimate villain, is hugely ambitious. He seeks power, reversal of age, immortality, fame and adoration. Yet he presents himself to his followers as a good guy, an underdog fighting valiantly to 'wrest the control of our society from the infantilising influence of ymbrynes.' What's more, he seems to have convinced himself to believe his own words. Poisonous envy of his sister has inspired him to brainwash and inflame others, but they don't even realise it, and neither does he. If something is worth fighting for, we must make every effort to thoroughly understand what we're supporting. Getting educated about what's going on around us is always worthwhile.

4) We should cling to faith and optimism.
Emma Bloom tries to encourage Jacob by saying, 'Doubt is the pinprick in the lifeboat.' She is an admirable character who depends on her inner strength, and trusts that her attitude will always be strong enough to see her through. I've recorded another quote from her. 'There's a pain sensor inside me that's not switched on. I can block out awful things and get on with it.' That's something I'd like to be able to echo, and perhaps we can, when we remember characters like Emma and follow her example by choosing to let go of feelings, resentments and hurts which aren't helping us, but may in fact be bogging us down. Focusing on positive, helpful things may enable us to just get on with what needs to be done.

5) The world around us helps to shape our gifts and talents
This is a theory put forward by Mother Dust, an enigmatic healer who has a heart to help others, but physically wears herself away to powder whenever she's doing what she does best. In the scope of this story her words apply particularly to peculiars, but the principle applies to any one of us. She believes that early in our development, we easily identify basic skills, interests and passions in ourselves. The directions they take are shaped to an extent by our environment, because when we believe we see a need, we focus on developing the necessary talents to fulfill it, to the exclusion of others. It's not that nothing else is possible for us, but nothing else is nurtured. Sounds like how we may come to identify our callings.

6) We should never be ashamed of attributes that set us apart.

Miss Peregrine always makes it clear, 'Nobody under this roof is ashamed of their gift.'

Over again, we see peculiars in these stories being shunned and marginalised by the 'normals' of our society, because majority rules. Rather than being admired, differences tend to be made fun of. But the shortsighted attitude is shown to be ridiculous, since peculiar attributes are harmless at least, and vital weapons at best. It's so easy to own the shame as our own when people pick on us, without ever questioning the validity of what they say. For years as a school kid, others teased me for having a 'big head'. I used to get very upset, but never once did it occur to me to question, 'So what?' Why should the size of my cranium have any bearing on the sort of person I am? Hopefully, these books will help make readers bully-proof, all the while they're enjoying the action.


Has anyone else read them? Or have I convinced you to give them a go some day?
I've reviewed each of the three books individually, Miss Peregrine's Home for Peculiar Children, Hollow City and Library of Souls.