A Patron Saint for Fangirls? 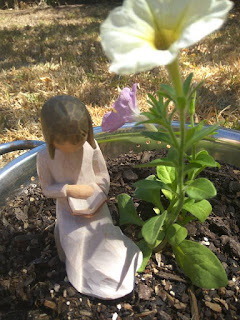 Disclaimer: Although I use the term 'fangirl' throughout this reflection to match my gender, it also applies to 'fanboys' and 'fanpeople' in general.

I am always on the lookout for role models from stories and history, to help direct the way I live and think. I used to fail dismally in living up to them, but figured out that was mostly because my choices were too different from me, and therefore set impossible standards. Now I'm making a point of choosing people whose traits match aspects of my own character, and this girl cries out to the strong reader, lover of stories and eager fangirl I've always been. If you relate to this reflection, you may well be the same.

Do you enjoy a good story? You look forward to reading a book, watching a movie, or listening to a podcast simply for curiosity. The fun of finding out a new fact, making an unprecedented connection or adding new favourite characters to your book lists is what drives you. The phrase, 'fascinating discovery' makes your ears twitch. Maybe you just want to know who's going to get married by the end of the novel, or who the bad guy is. And you've covered the backs and fronts of several pieces of paper with scribbled notes.

But an obvious drawback makes you sad. If someone asks the purpose for your reading and research, you'd be hard pressed to make a decent reply. You're not brilliant enough to add anything great to the world of science, engineering, politics or education. You can't point out a single soul who benefits directly from your love of listening and learning. It's nothing like the helping professions. (See The Modest Letter Q) You're merely very interested, but that's the limit. And however much you'd love to believe otherwise, something tells you being a fangirl isn't a skill, it's a luxury. Is it self-indulgent, though? Are you wasting your time, by taking in without the means of giving much out? Those are discouraging questions, and enough to make you wonder if you're pulling your weight on this planet.

That's why this Biblical girl is one of my favourite role models. Mary was sitting near Jesus with her eyes fixed on his face, captivated by every word he spoke. But Martha, her bossy older sister, poked out her head to pay her out for not helping in the kitchen. Martha put Mary in the embarrassing position of drawing their house guest into the tense family dynamics. 'Don't you think she should be helping me cook, serve and scrub up instead of sitting out here enjoying herself?' (In the same way, you've probably heard, 'Put down your book,' or 'Turn off the computer.' The ultimate message we get is, 'Do something that really helps and makes a difference.')

His reply probably shocked both of them. 'Martha, you're stressed out with many things on your plate, but Mary has chosen the best one of all, and who am I to deprive her of that?' Wow, he didn't say her choice was equally good, but even better. That's the statement that helps put our habit of idle curiosity into context. Could it be that being a fangirl is a gift after all?

One thing always surprised me about this story. We don't even get to know the subject of his discourse. What was he was even talking about to enthrall her so? Was it one of the stories or parables which are recorded elsewhere, or something entirely new? Was whatever it was worth risking a tongue lashing from Martha? Hey, if Mary was so spellbound, I'd like to get the inside scoop too. Why aren't we told, so we can share the benefit, or at least decide if we agree it was worth listening to?

But we don't get to find out, because it's beside the point. In this incident, the focus isn't on the master storyteller so much as his audience, and her reaction. Her attitude impresses him as totally commendable, to the point where he calls it a perfect use of her time. And she didn't even appear to do anything mindblowing with whatever she learned. There's no 'Book of Mary'. Her receptive, interested heart was enough. She enhanced her own life, which no doubt spilled over in quiet ways to those she brushed shoulders with. Maybe when a receptive, interested heart is the best we have to offer, it's enough from us too.

People often bring up counter points about this story. If you're thinking, 'Yeah, well somebody has to cook the meal and do the dishes,' I agree hard, tangible work is a great thing too. And sometimes people in Martha's position are quite right to speak up. But hard workers often get the pats on the back they deserve, because the results of their industry is pretty much in our faces. This little anecdote is highlighted for a different reason. Could it be that those with their heads in the clouds, being scoffed at as lazy slackers may deserve accolades too? What we take in through our reading, viewing and study does make a difference. It shapes us and what we have to offer in invisible but deep ways. You may hazard a guess that in this story, Jesus was talking about holy, spiritual things, but I'm writing this reflection with the understanding the many things under the sun are worth getting enthusiastic and excited about for the good they contain. And if somebody has to listen and take it in, let it be us.

So read on, my fellow nerds! Watch the documentary, learn how that game works, tell us your favourite novel from a particular series and why. When I'm feeling a bit fruitless, I sometimes think of Mary, who was never actually called the patron saint of fangirls (and guys) but might well have been.
Posted by Paula Vince at 5:00 AM